James Gerard Adamson was born in May 1917.

Prior to the outbreak of the Second World War, James served with the Gloucestershire Regiment as part of the Territorial Army, working in the paymasters office, before volunteering for Airborne Forces in August 1944.

He completed Parachute Course 136 in October 1944, at RAF Ringway, and served thereafter with A Coy of 8th (Midlands) Parachute Battalion.

James Adamson fought in the campaign in north-west Europe 1944-45 and was promoted to Corporal.

After the war, he joined the Manchester Police Force, and became their boxing champion. 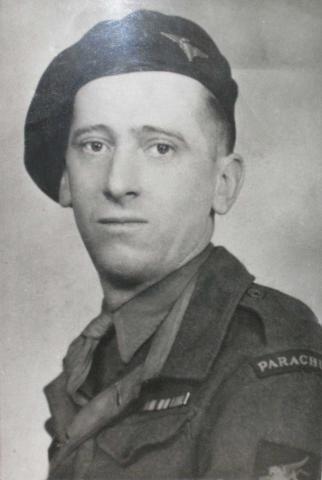 Ted McGreal said:
Lance Corporal James Gerard Adamson s/n 5187626. He served with the 1st Parachute Battalian. He trained at Tatton Park where the Regiment was first established.(Ringway), now Manchester Airport. He served in Germany and France. Before joining the Para's, James first job was in the Gloucestershire Regiment. His job there was working in the paymasters office of the Territorial Army. He transfered too and was promoted to L/Corporal 8th Para on 19th August 1944
Ted McGreal said:
I'm unable to find the link back to the airborneforces.org in West Australia now
Add your comment