James Francis Quinn, known to family and friends as Jim, was born in Glasgow in 1935. His father was a bus mechanic for the Glasgow Corporation and served as an RAF mechanic during WWII. His mother was a housewife. Jim left school at 15 to train as an apprentice tailor. He was also an avid cyclist as a teenager and was considered for selection, to represent Scotland, at the 1954 Empire Games.

In early 1955 he was conscripted to serve his National Service in a Glasgow infantry regiment. On completion of basic training he requested an opportunity to take The Parachute Regiment's selection test in Aldershot. Despite an injury near the end of the selection period, he passed and was transferred to the 1st Battalion later in 1955. He was employed in the mortar platoon as a specialist. He was also a member of the Battalion's Athletics Team which won the Inter Unit Team Championships of the Army Athletic Association in 1957. He individually won the 3-mile and was runner up in the 1-mile running events.

He saw service in Cyprus, Egypt and also took part in a NATO exercise in Denmark. In Cyprus he regularly patrolled the Troodos mountains searching for EOKA terrorists. In November 1956 his battalion was sent from Cyprus by ship to Egypt as part of the Suez Campaign. His Battalion went into action from landing craft further along the canal zone from the airport. He remembered the sound of heavy automatic gunfire from Egyptian army positions overlooking their landing craft as they hit the shore of the canal. Those Egyptian positions were quickly overwhelmed. In late 1957 he was moved from 'whole-time' to 'part-time' service and was transferred to the 10th Battalion Parachute Regiment (TA) until his discharge from National Service in 1961.

While serving in Aldershot he met his future wife, Joan, at a dance at the Atalanta Ballroom in nearby Woking. They married and he spent most of the rest of his life in Woking. They had 3 children: Stephen, John and Lisa; and 4 grandchildren: Hannah, Megan, Lily and Rose. After leaving the Regiment he spent most of his working life at Royal Mail in Woking and Guildford. Starting as a postman and moving into management later. On retirement he became a full-time carer for his wife, Joan, until she passed away in 2013. He then moved to live with his son, John, and his family, in Thailand before passing away in his sleep in 2014 in Chiang Mai.

Throughout his life The Regiment remained a very important memory for Jim. He, and his family, knew he had done something exceptional when he was a young man by serving his country as a 'Para'. 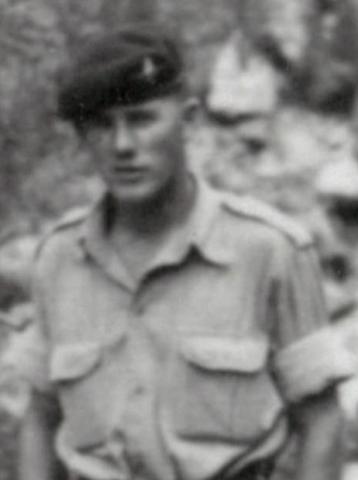