James Evans enlisted into the West Yorkshire Regiment and volunteered for airborne forces in May 1944.

He qualified as a military parachutist on course 119 which ran at RAF Ringway in June 1944. The instructors’’ report states ‘Cpl Evans: Above average, confident, cheerful, keen. Good leader.’

Cpl ‘Titch’ Evans was briefly posted to No 1 Airborne Forces Holding Unit before being sent to the 9th (Essex) Parachute Battalion in Normandy as re-enforcement.

He participated in the Ardennes campaign, Operation Varsity on 24 March 1945, and the Advance to the Baltic.

Sgt Evans served in Palestine and in July 1948 he was posted back to the West Yorkshire Regiment where it is believed he served until the mid 1950s. 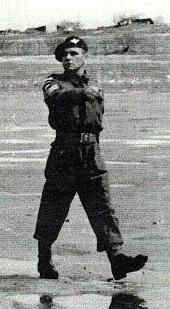