James Crawford enlisted into The Parachute Regiment in 1974.

Private Crawford undertook P Company with 408 Platoon which formed up in August 1974 and Passed Out on January 1975. He was then posted to A Company, 2nd Battalion, The Parachute Regiment (2 PARA).

Lance Corporal Crawford served with 2 PARA until 1986, apart from three years served with the Red Freds (‘The Red Devils’, The Parachute Regiment Freefall Team) as a freefall instructor from 1981-1984.

During his service he served in Malaya, Northern Ireland (Operation Banner), Berlin, America and Singapore. 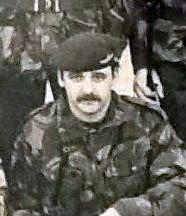