James Cooper was the son of William and Julia Cooper, of Wembley, Middlesex.

He volunteered for parachute duties and attended a short course for airlanding personnel, which started at RAF Ringway on 20 December 1942. He qualified as an airlanding parachutist by completing four descents.

The following year he took part in the amphibious landings in Italy during September 1943, onboard a mine layer, HMS Abdiel.

Shortly before the men were due to disembark HMS Abdiel hit a mine, causing its own mines to detonate and splitting the ship in two. The ship sank in four minutes. Over twenty members of the battery died in the explosion including Gnrs Nuttell and Cooper who qualified together on the same parachute course. 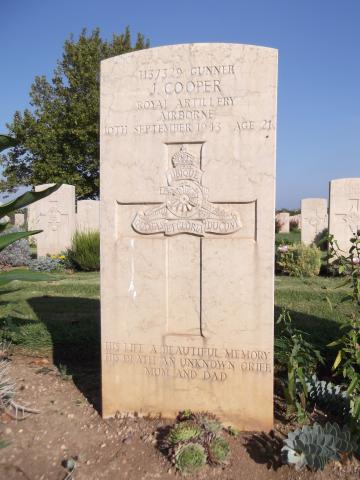