Ivor Thomas Jones was born in Pontefract, Yorkshire, and was a member of the Home Guard when he attested into The Green Howards in January 1941 at Southend–on–Sea. He was placed on class W reserve until he was called up in March 1941.

He transferred into the 4th Bn The Buffs (Royal East Kent Regiment) in July 1941 and served with them in Malta.

When in the Middle East, Pte Jones volunteered for airborne forces and was posted to the 11th Parachute Battalion.

He returned to Britain with the battalion on board HM Troopship Orion in December 1943 and arrived in Liverpool on 4 January 1944.

Pte Jones jumped into Arnhem on 18 September 1944, as part of Operation Market Garden. He was reported missing on 20 September and was later reported as a Prisoner of War. Prisoner 117788 Pte Jones was sent to Stalag 11b at Fallingbostel, Germany.

Sgt Jones transferred to 2nd Bn The East Yorkshire Regt in November 1947 and  was demobbed in January 1948. 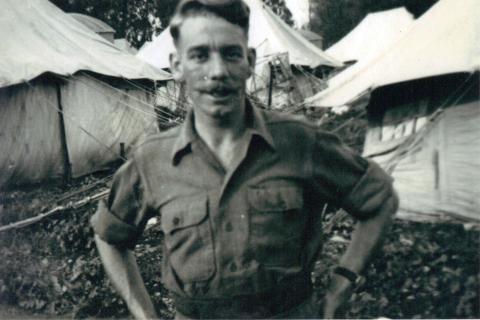