He was granted a commission into the Royal Artillery in 1936 and later volunteered for airborne forces, initially transferring to The Parachute Regiment as part of the Supplementary Reserve of Officers in November 1942.

Patterson became 2 i/c of 11th Parachute Battalion on its formation in March 1943 and was heavily involved in recruiting. He spent the next few months touring Army bases in the Middle East to help bring the battalion up to strength.

He transferred to the Special Boat Squadron, then part of 1 Special Air Service Regiment, in November 1943 and commanded an SBS detachment on operations in the Aegean in early 1944.

Patterson was subsequently awarded a Military Cross for his actions. The citation notes:
“On the island of NISERO on 7 Mar this officer personally commanded the party which captured 2 enemy assault craft. This operation would have not been successful save for the careful planning of this officer, his resourceful improvisation on the spot at considerable risk to himself and the dash and disregard of personal safety which he showed in the conduct of the operation.
The assault on the boats was made possible by the accurate fire of this officer from a Bren Gun although in an exposed position. As a result of this operation 2 Assault Craft were captured, 22 enemy killed or taken prisoner and much equipment and arms taken.
This officer commanded the SBS detachment operating in the AEGEAN in Feb, Mar and early Apr. The success of these operations was due in large measure to his initiative and to the personal inspiration he gave in leadership and in disregard to his own safety on the above occasion and in other operations in the islands of COS, PATMOS, and PSERIMO.”

He was awarded a Mention in Despatches for actions on operations in Greece in October 1944, while commanding L Detachment, Special Boat Squadron, 1 SAS Regiment. 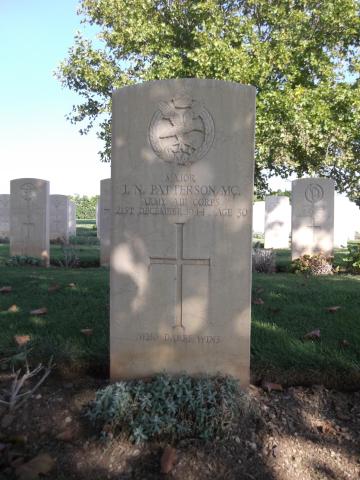