Ian MacDonald was born in Glasgow and pre war had been a Territorial in the Royal Signals and was commissioned when he volunteered for airborne forces.

For Operation Overlord in Normandy in June 1944, Ian landed in Glider 5 of the Coup de Main force as the Parachute Liaison Officer tasked with linking up with the 7th (Light Infantry) Parachute Battalion when it dropped in. A task which, according to Major Howard, proved difficult following the scattered nature of the drop.

Ian was attached to the headquarters company and took part in the fighting around Pegasus Bridge in the subsequent days. He was wounded in an attack in the woods around Herouvillette and died of his wounds on 29th June 1944 aged 23.

Lt Ian MacDonald is buried in Ranville War Cemetery in plot IIIA B9. 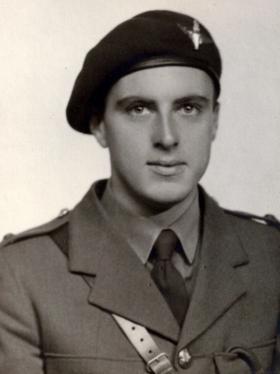