Sgt Ian McKay was killed in action leading an assault on enemy positions during the Battle of Mount Longdon in the Falklands Campaign of 1982 and posthumously awarded the Victoria Cross for his act of heroism.

Born near Barnsley, South Yorkshire in 1953, Ian John McKay passed through Depot, The Parachute Regiment and Airborne Forces, as a recruit in 1970 and was posted to 1 PARA in 1971, with whom he served in Northern Ireland, Germany and the United Kingdom.

From 1976 to 1978 he served at Depot as a Corporal Instructor before joining 3 PARA on a two year posting, latterly as a Sergeant with B Company.

A further posting to Depot followed in 1980, first in the Weapons Training Wing and then with Recruit Coy until he returned to B Coy 3 PARA, this time as Platoon Sgt of 4 Platoon in February 1982.

Sgt McKay deployed with his battalion for the Falklands campaign and, after a gruelling tab (battle march) all the way across East Falkland, 3 PARA conducted a night assault on an enemy battalion in prepared positions on Mount Longdon, part of the Argentinean defensive shield around Port Stanley.

After the initial objective had been secured, 4 Platoon was ordered to clear the Northern side of the long East/West ridge feature, held by the enemy in depth, with strong, mutually supporting positions. By now the enemy troops were fully alert and defending their positions fiercely. As 4 Platoon advanced they came under increasing, sustained heavy fire from a number of well sited enemy machine gun positions.

It was clear that instant action was needed if the advance was not to stall with increasing casualties. Sgt McKay decided, therefore, to attack even though he was in no doubt about the strength of the enemy positions and, after quickly gathering a number of men, broke cover and charged. The assault was met with a withering hail of fire with two soldiers wounded and one killed. Sgt McKay, with complete disregard for his safety, continued the charge alone and on reaching an enemy position cleared it with grenades, thereby relieving 4 and 5 Platoons.

To mark the 25th anniversary in 2007, an accommodation block at the Defence Academy Shrivenham was officially opened by his mother, Mrs Freda McKay.

During the night of 11th/12th June 1982, 3rd Battalion The Parachute Regiment mounted a silent night attack on an enemy battalion position on Mount Longdon, an important objective in the battle for 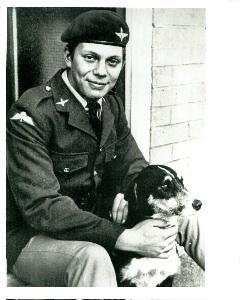