Hugh Grant was born in 1937 near Inverness, the second of four boys and a girl.

He enlisted in The Parachute Regiment in 1957, aged 19, for his National Service. Private Grant was part of 124 Platoon Recruit Company at Aldershot.

Private Grant spent three months training at Aldershot before passing, and was then sent to RAF Abingdon for parachute training. He attended course number 452 between 21 September to 15 October 1957, in which he undertook eight jumps from a balloon, a Hastings and a Blackburn Beverly, including night jumps.

He was promoted to Lance Corporal and attended an Infantry Clerks Training Course. Following an escapade out of the camp one night, he was demoted back to Private.

On completion of his course, Private Grant was posted to HQ Company 1 PARA as clerk.

In July 1958 the Battalion was sent to Cyprus. Private Grant accompanied them and was posted to C Company. A few months later, he took part in a Company drop out of an old Dakota. Waiting to jump, he became alarmed at the old and rusted state of his parachute, but despite his misgivings, the parachute opened and he landed safely.

The Company then became involved in Internal Security affairs in Cyprus, and in November 1958 took part in Operation Filter Tip, with the objective to clean out EOKA from the Kyrena range.

Whilst in the East, Private Grant managed to visit Jerusalem on leave.

Private Grant returned to UK with his Company in March 1959.

In September 1959 1 PARA took part in an Exercise in Norway to capture Bardufoss Airfield. Private Grant travelled by ship to Trondheim, and then flew into Norway, jumping near Bardufoss. As Private Grant was in the air, he noticed some of the cords of his parachute were torn and made the decision to pull his reserve chute. Several other members of the Company had the same problem, and it emerged that some of the parachutes had been damaged by a severe frost.

Hugh Grant later married Joan, which whom he had 5 children. After his National Service, he had a career in Hotel management, and was the Founder Chairman of Highlands and Islands PRA Branch.

Information taken from ‘A Game of Soldiers’ by Hugh T Grant. 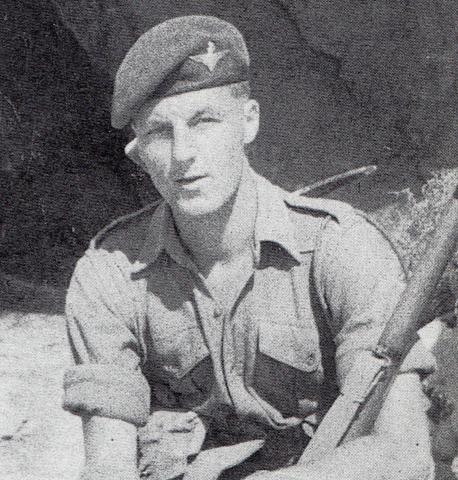