Hubert Charles Pond, known as Hugh, was born on 22 February 1923 at Twickenham, Middlesex, and educated at Thames Valley Grammar School. He was commissioned into the Royal Tank Regiment in December 1942, and in May 1943 he volunteered for The Parachute Regiment.

Second Lieutenant Pond attended parachute training course number 68 at RAF Ringway between 14 and 27 June 1943. He was then posted to A Company, 9th Parachute Battalion as a platoon commander.

In June 1944, War Substantive Lieutenant Pond took part in the assault on Merville Battery in Normandy. Using a combination of glider and parachute troops, the objective was to destroy the Germany battery on the coast. WS Lieutenant Pond’s glider ran into heavy firing and landed east of the battery in a crash landing that broke three of his ribs.

WS Lieutenant Pond set up an ambush to intercept a company of Germany infantrymen and successfully drove them off, earning an MC.

After the battery had been disabled, WS Lieutenant Pond led his company to the Chateau St Côme, south of the village of Bréville. In the dark, he lost his way and took his men straight through the Germany occupied village. After digging in, WE Lieutenant Pond and his company came under fire from artillery, which filled the air with dust. The dust caused him to sneeze and further damage his cracked ribs. WS Lieutenant Pond was unable to move and evacuated back to England, despite his protests.

Once recovered, WS Lieutenant Pond returned to Normandy and took part in the Rhine Crossing.

In January 1946, Lieutenant Pond was granted a permanent commission in The Middlesex Regiment where he stayed until 1959 when he entered the Regular Army Reserve of Officers, before demobilising in July 1959 with the rank of Major.

During this time he served with the Commonwealth Division in Korea where he was Mentioned in Dispatches in 1953, and also served in Berlin as a public relations officer.

Hugh Pond later worked as a military correspondent and then for the Tupperware Company, working in America and South East Asia. After retiring he lived in Surrey with his wife, Mila Ackerley, whom he married in 1960. He enjoyed photography, travel and cookery, and published several books.

By Rebecca Blackburn with information supplied by Bob Hilton and The Telegraph. 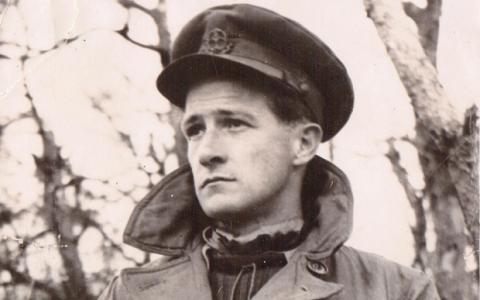