Le Patourel (known as Wally in Guernsey and Pat in his regiment) was educated at Elizabeth College, Guernsey, and always wanted to be a soldier. During his last year at school his father died, and he was persuaded that it was his duty to stay in the island and look after his mother. So, in 1934 he became a bank clerk and satisfied his military aspirations in 1936 by joining the Royal Guernsey militia as a second lieutenant. His mother settled into widowhood and Le Patourel received a legacy of £500. This enabled him to prepare for the army entrance examination. In 1937 he transferred to the Hampshire regiment (supplementary reserve of officers) and in 1938 was granted a regular commission in the regiment.

Within a year the Hampshires went to France. In 1940 Le Patourel was evacuated from Dunkirk and was mentioned in dispatches. Two years in the UK followed but in November 1942 the 2nd battalion of the Hampshires sailed for Tunisia. Almost at once they were involved in the battle for the Tebourba Gap. On the fourth day of a fierce battle, 3rd December 1942, Z company, commanded by Le Patourel, came under heavy fire from high ground. A brave attempt by an already depleted platoon from Z company failed to win it back. Then Le Patourel requested permission to make one last effort to dislodge the Germans.

He then personally led four volunteers under very heavy fire to the top in a last attempt to dislodge the enemy machine guns. Major Le Patourel rallied his men and engaged the enemy, silencing several machine gun posts. Finally, when the remainder of his party were killed or wounded, he went forward alone with a pistol and some grenades to attack the enemy machine guns at close quarters. From this action he did not return. He was believed to be dead, and his Victoria Cross was awarded 'posthumously'. In fact, he had been badly wounded and was taken prisoner, sent to hospital in Italy, and, as a seriously wounded prisoner, was repatriated in September 1943. Happily he recovered his health and was able to rejoin the service. In 1944 he landed in Normandy on D-day plus four as a senior staff officer, brigade major with the 53rd (Welsh) Infantry Division, serving with them until the end of the war in Europe.

Le Patourel's subsequent career was varied and distinguished. From 1945 to 1947 he instructed in India at the Quetta Staff College. In 1948 he was appointed instructor at Warminster School of Infantry. On 26 October 1949 he married Babette Theresa Beattie (b. 1925) of Guernsey in the Town Church, where his father had been churchwarden; they had two daughters. The following year Le Patourel trained as a parachutist and was appointed second in command of the 2nd battalion of the Parachute regiment, serving in the Middle East. [1] In 1953 there followed a staff appointment as a deputy assistant adjutant-general at the War Office. In 1954, now a lieutenant-colonel, he commanded the 14th battalion of the Parachute regiment and the 5th battalion of the Royal Hampshire regiment (TA) at Southampton. [2] From 1957 to 1959 he was in Washington, DC, as general staff officer to the British joint services mission. In 1959, promoted to brigadier, he moved to Ghana as deputy commander of its army. While there he had a heart attack but was able to serve for two more years as deputy commander of 43 (Wessex) division district. In 1962 he retired.

Le Patourel's first three years as a civilian were spent as manager of the Fowey–Bodinnick ferry in Cornwall. Then in 1966 he joined Showerings Vine Products as executive assistant to the directors. In 1969 Showerings took over Harveys, the Bristol wine merchants, and Le Patourel became for the rest of his life a director of Harveys. During his Bristol years he lived in the county of Somerset and was appointed deputy lieutenant in 1974. He planned to spend his retirement raising Jacob's sheep and bought a farm in Chewton Mendip, but he died there of heart failure two years before his sixty-fifth birthday, on 4 September 1979, and this dream was never fulfilled. He was cremated and his ashes scattered at South Bristol Cemetery and Crematorium, Bedminster. Le Patourel's regimental obituary described him as a kind and conscientious officer who never spared himself and got the best out of those he commanded. He met adversity calmly. He had energy, endearing charm, and a lively sense of humour. His medals are held by the Royal Hampshire Regiment Museum, Winchester, Hampshire.

[2] Served as the Commanding Officer of the 14th Bn, The Parachute Regiment (Territorial Army) from November 1954 until mid-1956 when it was converted to a new role and was no longer the 14th Bn. 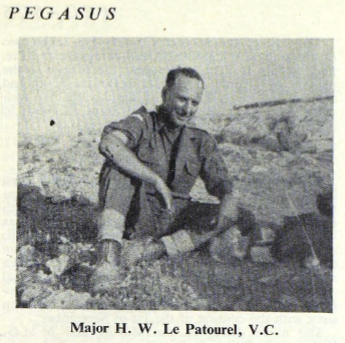