Private Herbert Francis Kent qualified as a military parachutist on course 132 which ran at RAF Ringway from 4 to 14 September 1944 and was posted to 22 Independent Parachute Company, a pathfinder unit.

He took part in Operation Varsity, the Rhine Crossing, and then participated in the fighting advance across Northern Germany to Wismar east of Lubeck on the Baltic Coast.

By May 1945 Bert was in a far flung village in Northern Germany and given official documentation to account for his presence:

"The bearer 1445122 Pte Kent reported on May 10 to 820 Mil Gov Det that he was living in the village of Teschow. As there was no other troops of occupation he was given permission  to stay at the village to keep law and order as there has been a lot of trouble caused by Russians and Poles looting and burning down farms."

By July 1945 he was back at Ringway on a refresher parachute course (R171) at RAF Ringway.

As part of the 5th Parachute Brigade, he was deployed with 22 Independent Parachute Company to the Far East and spent time at Malaya.

Following the Japanese capitulation Bert served in Palestine before discharge. 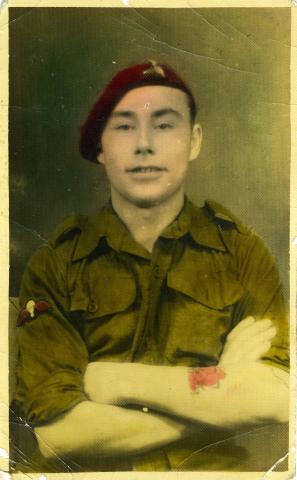