Landing prior to the 1st drop on Sunday 17th September, the company acted as 'Pathfinders', responsible for marking out and protecting 'Drop Zone' Z in preparation for the arrival of the 1st Parachute Brigade. On the 18th September, No 1 Platoon were tasked with protecting Landing Zone L, where they would take delivery of the supplies being dropped by the RAF.

On the following day, the Platoon again returned to Landing Zone L, in preparation for the arrival of the first wave of Polish gliders. Following some severe fighting, the Platoon became cut off from the rest of the Company. Marching throughout the night, they reached Ommershof where, after digging in, they remained for the next two days before being withdrawn in the early hours of the 22nd September.

Arriving in the now forming defensive perimeter around the Hartenstein Hotel, they had a short rest, before taking up defence of the vital cross-roads area near the Schoonoord. They held their ground for the next four days before being withdrawn across the Rhine on the evening of the 25th/26th September 1944.

'The above officer led his platoon with great gallantry throughout the action. On the evening of 18.9.44, he was detailed with his platoon to put out navigational aids on L.Z. "L" for a supply drop. He found the enemy in occupation of this area in some strength. He immediately attacked them, killing or capturing the lot. On 19.9.44, he again returned to this area to assist in the landing of gliders. As soon as the gliders appeared the enemy put in an attack. This was driven off and the enemy held until all the gliders had been unloaded. Later he found that his route back to the Company area had been cut off by the enemy, but he successfully led his platoon through the enemy positions.

From 20.9.44 until the withdrawal on 25.9.44, he held a position which was constantly exposed to murderous enemy fire, but regardless of personal danger he went constantly round his section positions encouraging his men. His great example undoubtedly kept the spirits of his men at such a high level that in spite of numerous enemy attacks and heavy casualties they hung on to their positions until the end.' 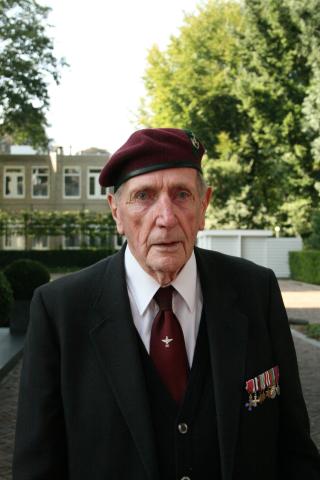