Henry Miller Sherwood, known as Jock, was born in 1918 in Glasgow, Scotland. He volunteered for Airborne Forces in early 1944 and after passing the selection training at Hardwick Hall he was sent on parachute course No 101 at RAF Ringway, 31 January to 13 February 1944.

He completed three descents from a balloon during the day, and one at night and four descents from an aircraft to qualify as an operational parachutist. His instructors comments: ‘A good performer, jumped well from any position’.

After the course he was posted to the 1st Parachute Squadron, RE, as one of a party of seven reinforcements. The Squadron was tasked with supporting 1st Parachute Brigade in taking Arnhem Bridge. Sapper Sherwood was a member of the squadron’s clearing party, consisting of eleven other ranks under Captain Stephen George, which was left behind on the Drop Zone near Heelsum in order to take care of wounded and collect supplies. By the time the party had reached Oosterbeek, German troops had already established a blocking force near the Municipal Museum making it impossible for further British troops to reach the bridge. The clearing party was put under command of 9th Field Company Royal Engineers in the grounds of Sonnenberg House and ordered to dig in on the right hand side of Sonnenberglaan. Sapper Sherwood was killed on 20 September 1944 by a mortar bomb landing in his slit trench after having just been relieved from manning a Bren gun position with Sapper Thomas Hicks.

In 1991 his remains were found in the very same slit trench and subsequently exhumed by the Netherlands Army’s Recovery & Identification Unit (RIU). Despite a Royal Engineers cap badge having been found, sadly at that time the remains could not be identified, due to the absence of dental treatment cards at the Army Records Office. His remains were interred in Oosterbeek War Cemetery in 1993, in grave marked: “a soldier of the Corps of Royal Engineers, known unto God”.

The case was reopened in 2005 by OC RIU Lt Geert Jonker and Henry Sherwood successfully identified after Lt Jonker’s findings were confirmed by the eye witness to Sherwood’s death: ex-Sapper Thomas Hicks.

On Wednesday 16 September 2015, a special ceremony took place in the Arnhem-Oosterbeek War Cemetery. At 10.00 hours the re-dedication ceremony commenced of the grave of Sapper Henry Miller Sherwood, who served with C-Troop, 1st Parachute Squadron Royal Engineers.

His next of kin (Henry Sherwood had ten brothers and sisters) as well as Thomas Hicks attended the re-dedication ceremony. The service was supported by a party of the 23rd Parachute Engineer Regiment. 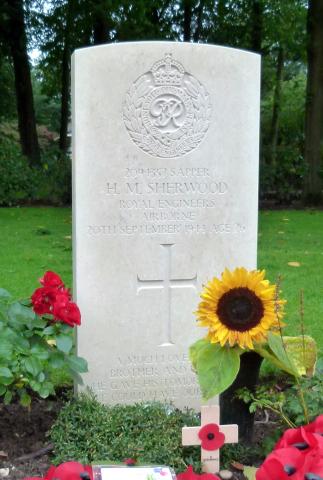 henry watson said:
I was contacted by the graves commission asking if I was related to sapper henry miller Sherwood. this started what became our family, nephews and nieces attending our uncles grave rededication. many thanks to geert junkers and sapper tom hicks for their identifying henry's death location.
Add your comment