He originally enlisted into the Royal Artillery before volunteering for the Corps of Military Police. ‘Cab’ volunteered for airborne forces on the formation of an Airborne Provost Company and qualified as a military parachutist in 1942.

'Cab' saw service in North Africa and took part in the parachute operation into Sicily in July 1943. (See his personal account in the article below.)

He was No 1 Section Sergeant attached to 1st Parachute Brigade for the divisional airborne assault to capture the Rhine crossings at Arnhem as part of ‘Operation Market-Garden’. He jumped onto DZ ‘X’ on Sunday 17 September 1944 and, after making his way to the RV, followed the Headquarters of the 1st Parachute Brigade into Arnhem, where he and the rest of No 1 Section ‘peeled off’ to go and take over the Arnhem Town Police Station.

Very soon they were cut off from the bridge defenders and some time on Tuesday 19 September the Germans realised that the police station was held by British troops. Sgt Callaway was killed during the ensuing attack, although there are conflicting accounts as to how he met his death.

Sgt ‘Cab’ Callaway is believed to have been killed in action on 19 September 1944 aged 29 years old, and initially buried in the Moscawa General Cemetery in Arnhem. He is now buried at Oosterbeek War Cemetery, Arnhem. Please see a copy of a page from The  Cornelius Ryan Collection, which gives more detail of the circumstances around his death.

Sgt Callaway was one of 17 NCOs who left Company Headquarters on 13 July 1943 for the airborne landings on Sicily. 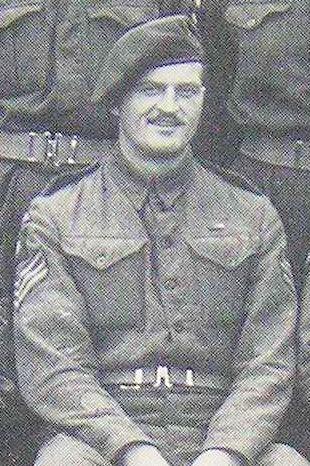