Henry enlisted into the Worcestershire Regiment on the 15 July 1943.

He volunteered for Airborne Forces soon after he completed his training and, after completing the Selection Process at Hardwick Hall, he was sent onto Parachute Course 96, at RAF Ringway, which ran from the 16 to the 30 December 1943. This was a long course of eight descents, two from the balloon during the day, one from the balloon at night, five from aircraft. His Parachute Instructor comments: “A good type, was always confident and keen”. Upon completion he was sent to the Holding Company, Depot and School Airborne Forces.

Sometime in January 1944 he was posted to the 1st Parachute Battalion, then stationed in Lincolnshire, with their Headquarters at Grimsthorpe Castle. He was assigned to 2 Platoon, ‘R’ Company, which was billeted in Bulby Hall, about two miles up the road from Grimsthorpe Castle.

On Sunday, 17 September 1944 he took off in a C47 (Dakota) aircraft from Barkston Heath aerodrome, bound for DZ ‘X’ at Renkum Heath in Holland to take part in Operation ‘MARKET’.

At some stage during the battle that followed he was wounded and taken prisoner. He was sent to Stalag 11B, at Falingbostel in Germany, and given the POW No: 90389.

Upon release from the POW Camp, in 1945, and his return to England, he transferred to the Royal Electrical and Mechanical Engineers, on the 19 July 1945. 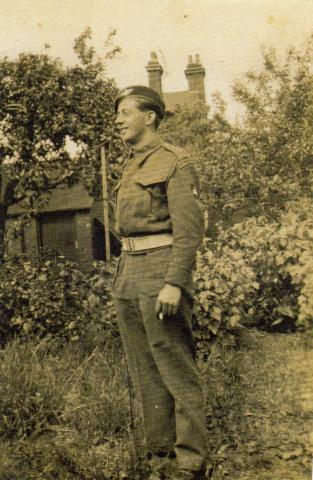