Gerry Taggart was commissioned into The Royal Engineers in 1962. After a tour in Germany and active service in Aden, he joined 9 Independent Parachute Squadron in 1965 as a Troop Commander.

He changed beret colour to green and completed a tour as a staff officer in 3rd Commando Brigade. Further tours as adjutant in Germany and Tactics instructor at Canadian School of Military Engineering followed.

Gerry was please to be appointed to command 9 Squadron during 1976-78. The tour was as usual a demanding one, with a hard South Armagh tour, a major project in Canada and a three month deployment on the firemen's strike.

The period of command was marked by 9 Squadron losing its independence and coming under command of 36 Engineer Regiment. But the red beret was retained.

After 9 Squadron, Gerry joined the Oil Industry and worked with BP and others in the Middle East and Former Soviet Union as well as frequently visiting USA and Africa as a consultant. He served in the TA - in 30 Engineer Brigade and as Commander Engineers Home Defence in Wales and Western District. He is a Chartered Engineer and belongs to the Engineer and Logistics Staff Corps as an oil operations adviser.

He is currently researching Operation Freshman, the 1942 airborne sapper glider raid into Norway to disrupt German heavy water supplies. His book will be published this year. 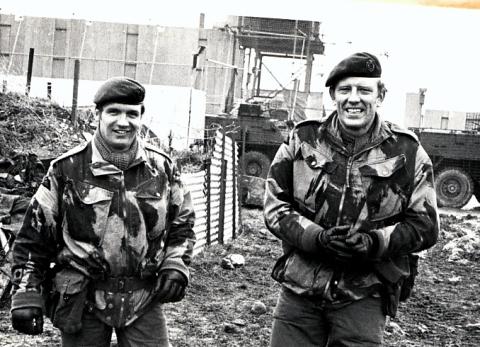