Henry 'Bill' Frances served with The Royal Army Service Corps prior to volunteering  for airborne forces during World War II.

He qualified as a military parachutist on course 112 which ran at RAF Ringway from 17 April to 7 May 1944 and was posted to the 1st Parachute Battalion.

Unfortunately, he broke his ankle on a training jump  when landing on a road and as a result did not deploy with the battalion to Arnhem during Operation Market Garden.

He later served in Denmark after rejoining the battalion and was then posted to the 8th Parachute Battalion, deploying to Palestine.

Compiled with the assistance of David Frances. 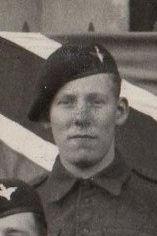