Henry Fairbrother Bear was born on the 31 March 1914, and came from Lewisham, London.

After serving in an Officer Cadet Training Unit he was granted an emergency commission as a Second Lieutenant in the Royal Regiment of Artillery on the 2 November 1940.

In the Summer of 1944 volunteered for Airborne Forces.

He is listed as being posted to No 1 Forward Observer Unit, RA at Harlaxton Hall, in Lincolnshire on the 27 June 1944. However, on the ‘Field Return Of Officers’ he is shown as being attached HQ, RA 1 Airborne Division [1b]

This is borne out by an entry in the War Diary of the 1st Airlanding Anti-Tank Battery, RA for June 1944 states on the 25 June: ‘Capt HF Bear, RA attached from HQ, RA 1 Airborne Div.’ [2]

This has got be because of the plan to use Capt McLeod to act as a ‘third’ Battery Commander, and another Battery Captain was needed in the 1st Airlanding Anti-Tank Battery, RA.

With Capt. McLeod being detached from the Battery, Capt. Bear was listed as Battery Captain ‘Q’.

By his own account he was allocated to the  2nd Lift, with Gnr RG Townsend as his Batman/Driver, a Dvr DJ White, with a Jeep and a radio operator, in charge of the group of 2nd Jeep and trailer for each Troop Headquarters.

‘When Captain Henry Bear arrived on the second lift, he got Driver White to take him into Arnhem twice, with supplies. Later on another unknown driver drove him in, and the jeep was shot up by a machine-gun, and the driver was killed. Henry tells the story of how he jumped from the jeep and vaulted over a wall with a jump that would have merited an Olympic record.’ [3]

He is listed as one of only two Officers from the Battery that got back across the River. [4]

He was photographed twice, once in Nijmegen (with a blanket instead of trousers), and then in England, Lincolnshire at the end of November/beginning of December 1944.

Captain Bear continued to serve after the war, but in May 1947 he joined the Honourable Artillery Company – Territorial Army.

He continued to serve with them until the 31 March 1964, when he was transferred to the Territorial Army Reserve of Officers, Regimental List – for the age limit.

Created with information, images and research by R Hilton 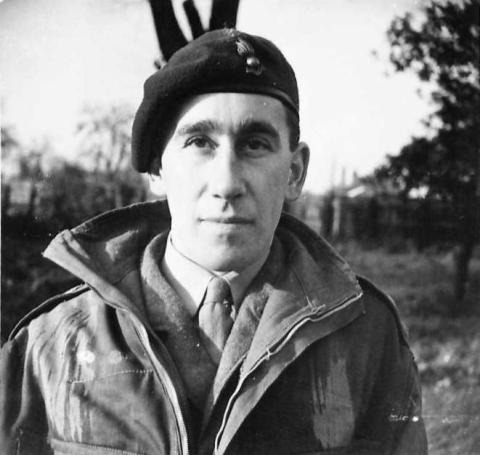