Sqn Ldr Helen Simpson joined the RAF as a NCO PTI in Jan 90.  She qualified as the first female RAF Adventure Training Instructor (ATI) in Sep 95 and the first female Parachute Jumping Instructor (PJI) in Jun 99.  She was promoted to Sgt in Jan 00 and in Aug 01, she became the first female PJI to complete the SF High Altitude Parachute Course (HALO/HAHO) Course.  She was subsequently posted to BPS at JSU Wattisham as the 9 Sqn RE (Para) and 7 RHA PJI.  In Sep 02, she was then posted onto the RAF Falcons Parachute Display Team for a short tour before attending Cse No 204 Initial Officer Training at RAF Cranwell in Jun 03.

Helen was commissioned in Nov 03, graduating as a Physical Education Officer (PEdO).  She was Parade Cdr on Graduation Day and also won the Longcroft Sports Trophy.  She immediately took over as OC RAF Weston-on-the-Green (WOTG) and managed the military parachuting programme, the JSAT courses and all RAF Sports Parachuting Assn (RAFSPA) activities.  She was then posted to RAF Cranwell in Feb 05 as a General Service Training Officer where she utilised her ATI qualifications and experience to facilitate leadership and personal development training for Student aircrew.  In Mar 07, she was posted to the Gymnasium at RAF Wittering as the Stn PEdO and received the LSGCM in the summer of 07.  She was then awarded a CinC's Commendation for “meritorious service whilst serving in Air Cmd” in Jun 08.

In Mar 09, she was posted to OACTU, RAF College Cranwell as a Flt Cdr to newly joining Officer Cadets. Whilst there, she also attended and passed the Resistance Instructor Course (née Conduct after Capture (CAC) Course) at RAF St Mawgan in Mar 10 and continued to provide support to SF training (Secondary Duty).  During her time at OACTU, she also specialised as a Leadership Instructor for 7 months and was A/OC E Sqn (Sqn Ldr) for the last 6 months of her tour.

On 9 May 2011, Helen was posted to 16X HQ to take over the SO3 J3 Air (Para) position on 9 May 11. In May 2012, she married Ryan and retired from the RAF on 12 Apr 2013 after 23 years of Service. She continued a close relationship with the Airborne Forces through various Arnhem trips and was a member of the Airborne Forces Network since 2012.

In Dec 2018, Helen rejoined the RAF on a VeRR 90 day contract as SO2 Air Activities - based out of RAF WOTG. In Jan 20, she was promoted to Sqn Ldr and rejoined on a 5 yr FTRS contract. As OC Robson Resilience Centre, Helen was again in command of JSAT Parachuting at WOTG and also Sec of RAFSPA. 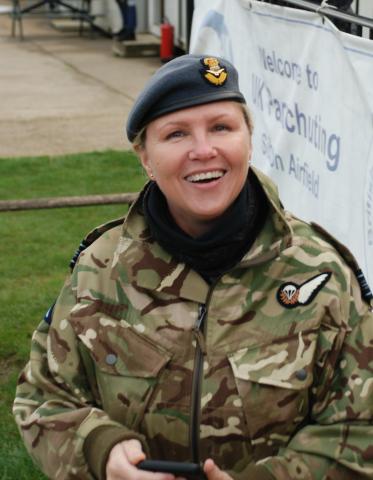