Aged 17, he joined the Artists Rifles Territorial Army in 1934. He was a keen shot and competed at Bisley where he won several trophies, including the silver Rose bowl in 1939.

At the outbreak of War, he remarked that he had been issued with a Bren gun and stationed on the Cliffs of Dover.

2nd Lieutenant Montgomery was commissioned into the Royal Berkshire Regiment and shipped out to India Base in Delhi. There he became responsible for organising the game shoots which bolstered the supplies for his Battalion.

Lieutenant Montgomery volunteered for The Parachute Regiment in November 1941 in India, attending the first Parachute Training course at the Air Landing School, New Delhi. The men jumped from Vickers Valencia aircraft, through a hole cut in the floor. He was posted to 151 Parachute Battalion.

Due to a lack of available parachutes and a number of deaths from parachuting accidents, in 1942 a group of officers including Lt Montgomery made a ‘confidence stick’, jumping without helmets or reserve parachutes to improve moral.

In September 1943 Captain Montgomery temporarily commanded B Company during the invasion of Taranto, and remained in Italy until November when the Battalion returned to the UK to prepare for the invasion of Europe. He supervised the equipment and stores during the preparation for Operation Market Garden.

Captain Montgomery dropped into Arnhem on 17 September 1944. His company commander was wounded, and Captain Montgomery took command of B Company. Detailed to take a defensive position near the railway crossing at Wolfheze, he had no radio contact with the Battalion HQ. The next day he led what remained of B Company to reinforce the platoon covering the south of the railway crossing. Captain Montgomery was wounded by machine gun fire before being captured and transferred to a German Hospital, where his left arm was amputated. He was sent to a hospital in the Black Forest to recuperate, but his condition remained critical, and in January 1945 he was repatriated by the Red Cross to England via Switzerland.

In late 1945 he joined the Control Commission based in Dusseldorf until 1949, when he returned to the UK, later working in the paper making and steel industries.

Hector married Anne, with whom he had two sons, Ian and Andrew. He contributed regularly to The Parachute Regiment charity all his life.

By Rebecca Blackburn with information supplied by John O'Reilly and The Pegasus Journal. 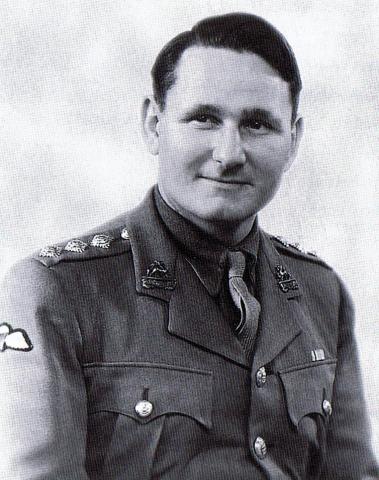