In civilian life Harry Royston Roberts was an engineer at the railway works in his home town of York.

He enlisted into the Army in February 1943 and was granted an emergency commission in the Royal Mechanical and Electrical Engineers (REME) on 12 June 1943, after completing training at 165 Officer Cadet Training Unit.

After volunteering for airborne forces, Harry attended Parachute Training Course 111 which ran at RAF Ringway from 10 to 21 April 1944. On qualifying as a military parachutist he was posted to 1st Airborne Division Workshops (REME).

Harry was officer commanding the Divisional Workshop's Motor Transport Repair Section, which supported the airborne assault to capture the Rhine Crossings at Arnhem, as part of Operation Market Garden in September 1944. He was severely wounded and paralysed, soon after landing at Arnhem, with a bullet close to his spine. He gradually recovered the use of his legs and by the time he reached Oflag IX A/Z was fully mobile.

After repatriation and returning to full health Harry served with HQ 1st Parachute Brigade, latterly in Palestine, until December 1946.

He was demoblised in 1947 and returned to the railways eventually becoming a Fellow of the Institute of Mechanical Engineers. His last post was as Works Manager of the Swindon Railway Works. He died suddenly in 1992 aged 71 as he was planning a trip back to Rotenburg and the route of the evacuation.

In 1990 Harry wrote a book of his wartime experiences, but died before he had found a publisher. Thanks to the considerable efforts of his widow, Muriel Roberts, it was eventually published as ‘Capture at Arnhem’ by Windrush Press in 1999. 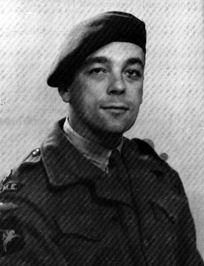 Mark Chapman said:
I have just read Capture at Arnhem....well worth a look....astonishing Harry survived the War. Airborne.
Add your comment