Harry Michael Ashbroke Cambier, normally known as Michael, was born at the Woodside Nursing Home, 405 Woodside, Plymouth, Devon, on 9 September 1921. He was the only child of Valentine and Hilda Doris Cambier. At the time of his birth his father was a Captain, serving in the Indian Army, with the 32nd Sikh Pioneers. His mother was the daughter of the Financial Commissioner for the Central Provinces in India.

Cambier was an extremely gifted academic, attending Ampleforth College, Yorkshire, from September 1935 to July 1940 after having obtained a scholarship from Wellbury Park Preparatory School, Offley, Hertfordshire, in April 1935. From Ampleforth he went up to New College, Oxford, in October 1940 with an ‘Exhibition in Mathematics’, a scholarship awarded on grounds of merit.

Having registered for military service under the National Service (Armed Forces) Act 1939, at Leeds on 10 October 1939, he was called up for military service on reaching the age of 20 and, on 6 November 1941 he was posted to 122nd OCTU (Officer Cadet Training Unit), a Royal Artillery Officer Training Unit at Larkhill, Wiltshire. On 28 February 1942 he was granted an Emergency Commission and posted to the 70th Anti-Tank Regiment, Royal Artillery.

He was sent to North Africa, arriving on 1 October 1942 and was posted as a reinforcement for the 244th Anti-Tank Regiment, part of the 84th Anti-Tank Regiment, He joined this regiment on 15 Noivember, on their return from the battle of El Alamein, and remained with them until 10 April  1943 when he joined the 156 Parachute Battalion then stationed at Jenin, Palestine.

He served with the 156 Battalion in Italy where he commanded no 6 Platoon, ‘B’ Company and was awarded a Mention in Despatches. On return to the UK he took command of the Anti-Tank platoon, part of Support Company.

He flew to Arnhem on 18 September and was wounded in the ankle on the morning of 19 September as 156 Battalion attempted to make headway against the strong German blocking line that had been established along the Dreijenseweg. Despite being wounded he remained with the Battalion and was last seen helping to get 6 pounder anti-tank guns across the level crossing in Wolfheze as they withdrew towards the Oosterbeek perimeter.

After receiving treatment for his wounds in Oosterbeek he was one of the lightly wounded that were transferred to St Elisabeths hospital during the temporary truce on 24 September.

From here he was soon moved on to the airborne medical hospital that had been established at the Koning Willem III Kazerne in Apeldoorn, remaining there only a short while before, on 26 September, he was amongst those lightly wounded that were selected for onward transfer to a prison camp in Germany.

He was put in a cattle wagon with a number of other officers and soon after their journey commenced attempts were being made to open a ventilation window on the side of the truck. This was successful, but only after having crossed the River IJssel at Deventer. Individually or in pairs six officers from this wagon were able to jump from the train through this window. Cambier teamed up with Raymond Bussell, from 3rd Parachute Battalion, and were amongst the last to jump, just before the train reached the small town of Holten.

On the morning of 27 September they sought help at the farm of the Roeterdink family in the village of Loo. Immediately recognising them as Allied soldiers but speaking little English the daughter, Hendrika, went to get help from her employer, Wicher Jansen, who lived in nearby Bathmen and whom she knew spoke English.

Jansen provided them with civilian clothing and took them to his house, De Menop, where he sheltered them and arranged for a local doctor to provide medical treatment for their wounds. They had expressed a desire to return to Allied lines and Jansen sought out a Dutch lad in hiding nearby, Albertus Huizer, who agreed to act as a guide.

At about 16:00 hours on the afternoon of Sunday 1 October the three set off and, at about 20:00 that evening, sought shelter for the night at a farm in ‘t Joppe, near Gorssel. The following morning they left this farm at about 07:00 and headed for a farm at Eefde which was owned by the farmer’s brother in law and who, it was said, would be able to assist them.

As they approached this farm they were overtaken by a German officer’s staff car, clearly heading for the same farm, so they quickly retraced their steps and headed to another farm nearby. The driver of the car, a German corporal, had clearly seen them and returned to challenge them. Only Huizer was able to produce identity papers so they were detained and taken to Gorssel where they were handed over to the local police, to make enquiries, with the driver saying that he would return later.

At the Police station Huizer confided in the senior officer on duty, Theodorus te Brake, that they were escaped prisoners of war that he was hoping to get across the IJsell. Knowing that Huizer would be shot if the Germans became aware of this he let him go. Te Brake was to pay a heavy price for this act of compassion as he was to spend the rest of the war in concentration camps.

The German duly returned and Bussell and Cambier were taken to Zutphen where they were held in a local Stalag. In the meantime details of their arrest had been passed to the Sicherheitsdienst office in Vorden and its second in command, Ludwig Heinemann, sent members of the SD to collect the prisoners for interrogation.

They were interviewed twice, first by Rottenführer Fischer, at his office in Zurphen, and then by Rottenführer Denner, at the SD office at Villa ‘t Seslham in Vorden. At the conclusion of the second interview Denner stated that he was in no doubt that they were escaped prisoners of war from the fighting in Arnhem and should be treated as PoWs but Fischer appears to have sown the seed in Heinemann’s mind that they had crossed the IJssel from the other side of the river and were spies.

Heinemann’s mind was made up and no matter what Denner said, shortly after the conclusion of the second interview, on the afternoon of 2nd October their hands were tied behind their backs and they were taken into the garden of the Villa ‘t Selsham and shot in the back, at close range, by Heinemann and Kurt Roters. Although German by birth Roters had lived in the Netherlands since 1926 and had taken Dutch Nationality.  Heinemann delivered a coup de grace shot to the head to each and they were quickly placed into a prepared grave and their bodies covered with lime with all other traces of the execution being destroyed.

Before leaving Wicher Jansen’s house Cambier had left three letters to be handed to the liberating forces when they arrived. Jansen complied with this request and one of the letters reached Cambier’s mother in June 1945. Despite her son having been reported missing this clearly raised her hopes and she sent a letter to Colonel Hugh Saunders, Special Forces HQ, who was related to the Cambiers through his wife, asking for help. He in turn passed the enquiry to Airey Neave, then still working with IS9.

Neave’s enquiries discovered that there had been a previous investigation undertaken by a Captain Pilgrim from SHAEF, also apparently prompted by another letter from Mrs Cambier to family contacts in the War Office.

Captain Pilgrim discovered that the bodies of Bussell and Cambier had been exhumed from their grave at Villa ‘t Selsham following information provided by Antonius Wiebe, a Dutch Policemen who had worked with the SD at Vorden and had been present when the bodies were buried. He had been arrested at the end of the war and provided this information when being interviewed.

On 9 June 1945 Wiebe took officers to the Villa where he pointed out the location of the grave, together with the location of another grave where other victims of the SD brutality had been buried a few days later. The bodies of Bussell and Cambier were exhumed but, because of the effect of the lime, identification was impossible and they were taken to Vorden cemetery for burial as unknown British soldiers.

Pilgrim learned that remnants of the clothing from the bodies had been retained and this allowed the cemetery staff to be able to indicate which body had been placed in which grave. Pilgrim then took this clothing to Wicher Jansen who was able to identify it as the same clothing that he had provided to Bussell and Cambier and therefore it was possible to establish which body was in which grave.

Pilgrim sent badges and labels from the uniforms, which Jansen had retained, to the War Office and their deaths were officially recorded as occurring on 10 October 1944.

Airey Neave’s report was the catalyst for a War Crimes investigation and this was commenced in October 1945. Those responsible were quickly identified but as Heinemann had been able to adopt the identity of a Luftwaffe soldier and had since been released from captivity, and was still at large, a decision was made that no action against any of the others would be taken until he was apprehended.

Heinemann was finally caught in March 1946 but, in the meantime, an agreement had been made with the Dutch Government that, because of the large number of Dutch civilians that Heinemann was responsible for killing, they would conduct the trial with the cases of Bussell and Cambier being included.

Heinemann was tried before a Special Court, at Zutphen, on 10 December 1946 and was found guilty and sentenced to death. This sentence was carried out on a firing range at Galgenberg, north of Arnhem, on 10 February 1947.

Following examination of the War Crimes investigation and the interviews conducted by Dutch Police officers it became apparent that the date of death of 10 October was wrong and that Bussell and Cambier had met their deaths on the 2 October 1944. A report was submitted to CWGC and the headstones were changed to reflect that date in 2019.

For more information see the book The Two Lieutenants by John Howes and Ruud Kreling. Published by Brendon Publishing. 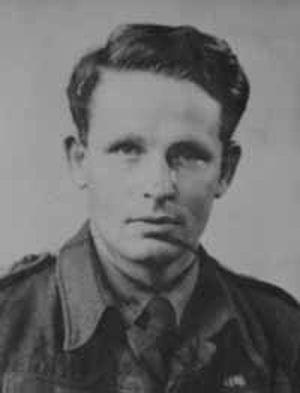