Pte Harry Lewis came from London and served with The Royal Army Service Corps prior to volunteering for British Airborne Forces in World War II.

The instructors on parachute training course 75, which he attended at RAF Ringway from 26 July to 8 August 1943, described him as "a good jumper" and he was posted to the Holding Wing on qualifying as a military parachutist.

He subsequently served with 5th (Scottish) Parachute Battalion and the timing of his parachute course would indicate that he served with the 5th Battalion on operations in Italy, South of France and Greece.

After the war he deployed with the battalion to Palestine, where he was killed as a result of an attack by members of the Stern Gang on the guard of a Divisional Car Park in Tel Aviv. (See account below.) 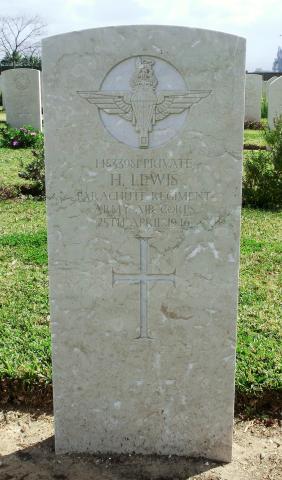