Harold Sands was born on 17 April 1925, the son of John Thomas and Nellie Sands from Brookfields in Birmingham.

When he enlisted on 13 February 1942 he gave his date of birth as 23 December 1923, thus trying to make out he was 18 years old, when in fact he was 16 years and 10 months old. This was not discovered until June 1942 by which time he was already serving as a boy soldier in the 70th Battalion, The Dorsetshire Regiment, No 14 Infantry Training Centre, Dorchester, where he had been posted on 26 February 1942. His underage status was merely noted on his record.

In late 1942 he volunteered for airborne forces and was officially transferred to the Army Air Corps on 1 May 1943. After completing the selection course at the Depot & School Airborne Forces at Hardwick Hall near Chesterfield he was sent on parachute course 64 at RAF Ringway, which ran from 10 to 21 May 1943. This was a re-enforcement course for the 1st Parachute Brigade in North Africa and he did the full eight parachute descents to qualify as a parachutist. His instructors' comment: 'With more experience will make a good paratrooper.'

He was then sent with the re-inforcement draft to North Africa, arriving there on 17 June 1943. Here he was posted to the 2nd Parachute Battalion and started training for the invasion of Sicily. Prior to this he had written a letter home, informing his mother that he was about to see action abroad. His mother went to the local police station to inform them that he was underage in an attempt to have him returned home. It would appear that the wheels of administration ground quite slowly and not only did he take part in the parachute assault to capture the Primosole Bridge - ‘Operation Fustian’ - on the night of 13/14 July 1943, but he also took part in ‘Operation Slapstick’ - the allied landings at Taranto in Italy.

The 2nd Parachute Battalion and the rest of the 1st Parachute Brigade landed at Taranto as part of the 2nd wave on the evening of 12 September and they took up defences in and around the town. However on 25 September the authorities finally caught up with him and he was ordered back to the 1st Airborne Division’s 2nd Echelon Base in North Africa to await a troop-ship back home.

He sailed back to the UK in October 1943 and docked at Liverpool on 7 October.

Private Sands was sent on another parachute course at RAF Ringway, No 91, which ran from 11 to the 26 November 1943. This time his instructor commented: 'Good, a capable and confident parachutist'. Upon completion he was posted to the 13th (Lancashire) Parachute Battalion, then stationed in the Salisbury area and preparing for the liberation of Europe from German occupation.

He was assigned to 6 Platoon, B-Company under the command of Lieutenant Edward ‘Terry’ Bibby. On the night of 5 June 1944 they took off for the drop on DZ (Drop Zone) ‘N’ in Normandy as the spearhead for the landings.

Pte Sands fought right through the campaign in Normandy and then on 17 August ‘Operation Paddle’ was launched. This was the break-out and pursuit operation by the 1st British Corps, of which the 6th Airborne Division was a part, to advance to the River Seine opposite Le Havre. The 13th Battalion eventually moved forward in transport via Troarn towards Putot-En-Auge.

A fierce battle then ensued for control of the town as outlined in the War Diary: '18 August 1944. 0400 hours - Battalion moved off through TROARN, and across the River DIVES to area 207703 in rear of 3 Para Brigade, where food arrived and the battalion rested throughout the day. Just before midnight the battalion moved off from the concentration area to cross the river at 237719 and to attack the village of PUTOT-EN-AUGE.

0145 hours - Battalion arrived at bridge 237719 to find it blown and not crossable. A change of plan was then made by the Brigade Commander entailing the transfer of the original assault to 7 & 12 Para Battalion’s and the follow-through assault to 13 Para Battalion.

0500 hours - Battalion now concentrated WEST of river crossing 237718 awaiting orders to cross. Whilst in this area considerable number of mortar bombs fall around the battalion, but no casualties were suffered.

1000 hours - Battalion crossed river, covered by artillery barrage, and entered the village of PUTOT-EN-AUGE. From here the advance was continued after a short pause up the steep slope to what was later known as 'Hill 13'. ‘B’ Company led the advance and had almost gained the summit when they were engaged by heavy MG fire, inflicting many casualties. Attempts by ‘A’ & ‘C’ Company’s to carry out flanking attacks were pinned down.

1530 hours - Orders were given to consolidate the position’s already held and not to advance further. This was done, and extremely accurate artillery fire and small arms fire inflicted very heavy casualties on an enemy counter attack which never reached our Forward Defence Lines. During the day the following officers were wounded - Major Tarrant., Capt Tibbs (RAMC). Lieut Bibby (missing). There were nearly 70 all ranks killed wounded and missing. Capt Grantham took over command of ‘B’ Company, Lieut Town becoming Adjutant in his place.'

Private Harold Sands was one of those that was killed in this attack, aged just 19 year and 4 months old when he was killed. He is now buried in Putot-En-Auge-Churchyard.

His mother requested that when she died her ashes be scattered in Normandy with ‘her Harold’. When she died her youngest son, Ray, who at the time was a serving member of 9 Parachute Squadron, RE, carried out his mother’s wishes. Whilst thumbing a lift in France to achieve this, he was picked up by none other than Maj Gen Richard Gale. On arrival Ray scattered his mother’s ashes at Putot-En-Auge churchyard in Normandy. 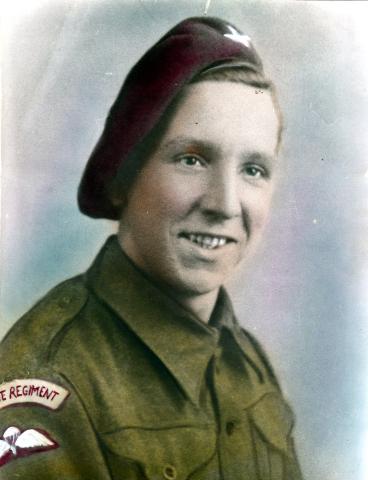