Born in August 1922, Harold Schilling was of German Jewish descent and born in Munich. He was educated at Gordonstoun and enlisted straight from school into The Pioneer Corps.

Harold was amongst a draft of linguists recruited to 21st Independent Parachute Company by John Lander in 1943. In common with the other refugee recruits, Harold took on a new surname (Bruce) to avoid identification as a Jew in the event of capture.

He qualified as military parachutist on Course 61B/62 which ran at RAF Ringway from 26 April to 4 May 1943 and went onto serve with the 21st Ind Para Coy in North Africa, Italy, Arnhem and Norway.

With No 1 Platoon in Arnhem, Harold sustained a number of shrapnel wounds in the thigh which were tended by the platoon's medic. A shilling piece he was carrying at the time, and which was badly buckled by the shrapnel, is now on display at the Hartenstein Airborne Museum in Oosterbeek.

Harold was later able to withdraw over the river with his platoon, along with the other remnants of 1st Airborne Division at the end of the battle.

He left the Company shortly before it deployed to Palestine, and was promoted to Corporal while serving  with a War Crimes Investigation Unit.

After the war Harold ran an antiques business with his wife.

A Diary of My Time at Arnhem September 1944. Ever after D-Day, the units of my division were ready for action. 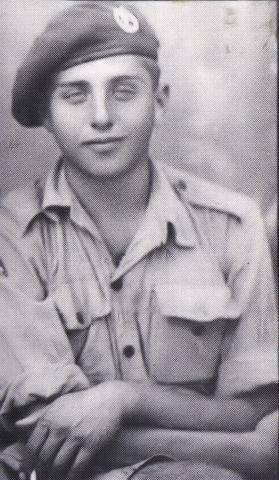 Peter Gijbels said:
Harold had had two lucky escapes before he sustained his wounds during the street fighting in Oosterbeek.
While descending from his parachute drop into Holland, he received a shot through a smock pocket and later during the battle a German machine gun fired between his legs without hurting him.

Harold was one of the members of the Company who regularly visited Holland during the annual commemorations in September. During these visits he always attended the wreath laying at the Canadian Engineer monument at Driel. He felt he was indebted to those engineers who had ferried him out of the Oosterbeek cauldron across the Rhine.
Add your comment