Gwyn Alwyn George Jenkins was born in Blaenavon, Wales. He was a welding engineer before enlisting with  The Royal Engineers on 2 November 1939. He was a member of The British Expeditionary Force until June 1940, and was evacuated from Dunkirk. After serving with the AMPC and GSC he joined The Norfolk Regiment. He was with them from 30 September 1943 to 28 December 1943 before volunteering for the airborne forces as part of the AAC.

Gwyn took part in Operation Market Garden and left for Holland 17 September 1944, as a member of 4 Platoon, B Coy, The 3rd Battalion of The Parachute Regiment. He was unfortunately taken POW on 26 September, whilst riding out of town on a bicycle, and imprisoned in Stalag XII-A in Limburg, Baden Wurtternburg, Germany. His POW number was 91527. He was eventually liberated  20 April 1945.

After serving for over 6 years with The British Army his was discharged on 19 December 1945 with 'Exemplary' military conduct.

Gwyn was married to Mary Ann Parker in Abergaveny on 6 December 1945. They had 2 sons and 2 daughters. During the war Gwyn was sent out to Australia to assist the Australian Para Bn. This may have influenced his decision to emigrate there with his family in 1963. Before leaving for Australia Gwyn was a Senior X Ray technician, inspecting aeronautical components. In Australia Gwyn became a factory manager, where he was known as George.

Created with information and images kindly supplied by Colin and Sylvia Renshaw. 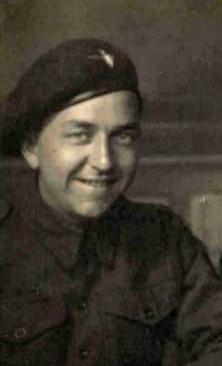