Gregor McKenzie served with distinction in The Parachute Regiment during World War II winning two gallantry awards for his actions at Bruneval and Oudna.

He enlisted into The Black Watch (Royal Highland Regiment) and volunteered for airborne forces at the formation of the 1st Parachute Brigade in late 1941. He successfully completed parachute training course 1 which lasted from 3 November 1941 to 15 November 1941.

Gregor was posted to C Company, 2nd Parachute Battalion, and took part in the Bruneval Raid as part of Jellicoe section, early the following year in 1942. He was awarded a Military Medal for his actions on the raid and the recommendation for the award notes:
“During a raid on the French coast at Bruneval on the night of Friday Feb 27th and Saturday Feb 28th this NCO was in charge of a small party whose duty it was to deal with the enemy guarding the Radio Location Station. This task was done most successfully. Throughout the operation he was conspicuous in his leadership, enthusiasm and in particular the determination with which he carried out the task. He showed great gallantry under fire.”

Gregor went on to serve with the 2nd Para Bn in North Africa and received a second gallantry award. The citation for his Distinguished Conduct Medal records:
“On 30th November 1942, during operations by 2nd Battalion, The Parachute Regiment , in Tunisia this NCO was a platoon Sgt of a company which was ordered to attack and occupy the landing ground at Oudna. When the landing ground was reached the company was attacked by five heavy German tanks. This NCO pressed on in spite of all opposition with a party of ten men, made a thorough reconnaissance of the landing ground and then brought his party back. On the following day the platoon was in position in the hills called Djebel Sidi Bou Hadjeba when the battalion was heavily attacked. Sgt Mckenzie in spite of heavy fire from artillery, mortars and machine guns and regardless of his personal safety moved about encouraging his men and held the position to the end. His conduct, gallantry and leadership were an example to his men and of the highest standard.” 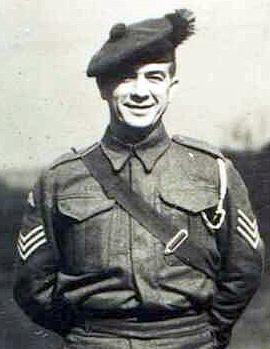 Ryan Storie said:
I am trying to find more infromation on my great grandfather Gregor Mckenzie. My family don't seem to know anything about him. I would be grateful if anyone has any information or photos of him. I believe he was taken PoW during Operation Torch in North Africa and that he escaped.
Add your comment