After completing some basic training he joined the Pegasus Gymnastic Display Platoon. Captain Mickey Munn was then the Platoon Commander, the platoon travelled all over the country carrying out displays including the 1977 FA Cup Final.

He then joined Cadre Platoon prior to starting recruit training with 442 Platoon. After passing out of Depot Para with 442 Platoon Pte Allen joined the Royal Jumps Course with HRH The Prince of Wales at Brize Norton in April 1978.

Pte Allen was then posted to 1 PARA in May 1978 and went straight to Northern Ireland (NI), he had his 18th birthday whilst on NI training.

He served with 1 and 2 PARA and also completed 3 tours at Depot Para as Cpl, Sgt and CQMS.

WO2 Allen's last posting was with 5 Airborne Bde Logistics Battalion as Training Warrant Officer, closing down the Bde ready for the move to Colchester. 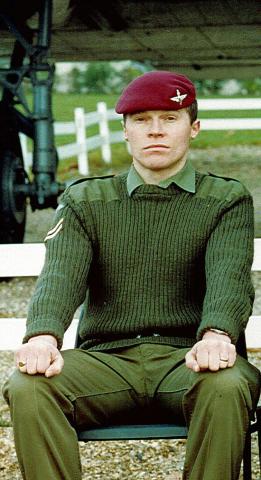