Anthony Douglas-Kerr enlisted at Belfast into the Royal Armoured Corps. He was embodied in the Territorial Army and posted to the North Irish Horse on the 27th October 1939.

Over the course of the next six months, Corporal Douglas-Kerr received three promotions in quick succession. These were from Private to Paid Acting Lance Corporal, to Paid Acting Cpl and finally to War Substantive Corporal.

Cpl Douglas-Kerr served in the 1939-40 campaign in France and Flanders. This would have been on attachment to another regiment as the North Irish Horse were not involved in this campaign.

On the 31st August 1940, he was posted to No. 2 Commando. After successful completion of a parachute training course in 1940, he was taken on strength to 11 SAS Battalion on the 9th December 1940. Cpl Kerr would go on to complete No. 4 Advanced Parachute Training Course in early 1942. The course consisted of 3 jumps (2 aircraft and 1 night descent) and acted as a refresher course.

Cpl Douglas-Kerr reverted to the rank of Trooper at his own request on the 3rd August 1941. During this time the 11th S.A.S. Bn was converting to the 1st Parachute Battalion. Trooper Douglas-Kerr was serving in 5 Platoon, ‘S’ Company, under the command of Lieut R.C. Manning.

After reaching the rank of Lance Sergeant in October 1942, L/Sgt Douglas-Kerr took part in Operation Torch (North Africa) as part of Mortar Platoon. He was wounded in action on the 2nd December 1942. Once L/Sgt Douglas-Kerr had recovered from his injury, he was posted to 1st Battalion, The Parachute Regiment on the 2nd February 1943. Three months later on the 8th May 1943, he was appointed Paid Acting Sergeant.

Sergeant Douglas-Kerr was posted to Medium Machine Gun Platoon as a Section Commander and took part in Operation Husky (Sicily). During the operation, he was awarded the Military Medal for his actions on the 14th July. His citation in the London Gazette(23rd December 1943) read as follows.

"On the Ponte Primosole in the River Simeto on 14th July 1943, Sergeant Douglas-Kerr was in command of a detachment of medium machine guns. In order to command a good field of fire, the guns had to be mounted in exposed positions. Sergeant Douglas-Kerr personally maintained his guns with ammunition and water. During this time he was constantly under heavy Mortar and intense Light Machine Gun and rifle fire. During the action, on several occasions, Sergeant Douglas-Kerr brought in wounded under fire.When his Vickers gun ammunition had been expended this N.C.O. collected a heavy enemy machine gun, the crew of which he had killed and used it against the enemy and inflicting heavy casualties. Sergeant Douglas-Kerr's gallantry and efficiency under the most difficult conditions were an inspiration to all ranks in the sector."

Following Op Husky, he took part in Op Slapstick (Italy) and whilst here he was appointed the rank of War Substantive Sergeant on the 4th November 1943. Having been the section commander of the Medium Machine Gun Platoon, he took over as the platoon sergeant on his return to the UK.

On the 9th December 1944, Sgt Douglas-Kerr was discharged to a commission. This was an emergency commission to 2nd Lieutenant in the King's Own Royal Regiment.

Following his commission, 2/Lt Douglas-Kerr was posted to Force 136 for Special Employment. Force 136 was an SOE unit operating in South East Asia. The cap badge in the profile picture is that of Force 136. (It is a tiger baring it's teeth with the word "Malaya" on the title below) He was appointed Temporary Captain in August 1945 and returned to the UK from India in February 1946.

Capt Douglas-Kerr was released from Regular Army Service on 4th August 1946 and granted the honorary rank of Captain.

With information supplied by Bob Hilton. 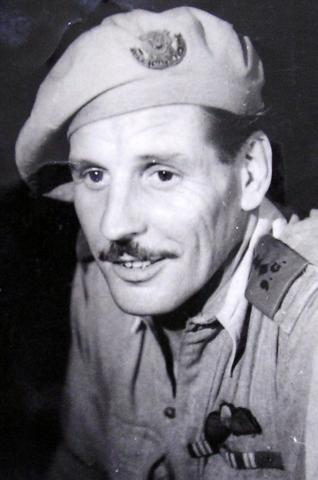