Graeme Warrack was born in June 1913 the son of a Edinburgh dentist. He attended Edinburgh University and qualified in dental surgery in 1936, and in medicine a year later. He then joined the family practice. Whilst at University he had been a member of the OTC and later joined the 7th/9th (Highland) Battalion, The Royal Scots (TA) in 1933.

In April 1939 he had achieved the rank of Captain, and agreed to undertake full time service before the general mobilisation of the Territorial Army. He continued to serve with the Royal Scots until July 1940 when he was transferred to the Royal Army Medical Corps (RAMC). After a brief posting as Section Officer with 7th Field Ambulance, he was appointed Major serving as DADMS (Deputy Assistant Director Medical Services) to 9th Armoured Division in November 1940.

His Airborne career began in July 1942, when he was selected as the second CO of 181st Airlanding Field Ambulance. One of his first acts was to secure the services of Warrant Officer 'Len' Bryson as Regimental Sergeant Major (RSM). Until his move to 181 Len Bryson had been Chief Drill Instructor at the RAMC Depot. It can only be guessed how well this move went down well with the men(!)

In May 1943, 181st Airlanding Field Ambulance sailed to North Africa to join the 1st Airborne Division. Within a short time he took part in the ill-fated invasion of Sicily. The 1st Airlanding Brigade was tasked with seizing a bridge known as Ponte Grande near Syracuse, on the night of 9-10 July 1943. The operation did not go well and about 100 of the 140 gliders taking part in the operation landed in the sea. This included the one containing Graeme Warrack, though he managed to swim ashore. He was initially confined to the eastern tip of Cap Murro de Porco until the arrival of the seaborne force, but later managed to rejoin the few members of his unit who did make to the objective. After returning to North Africa, the 181st took part in the Italian campaign in September 1943, before the 1st Airborne Division was withdrawn to the UK in late 1943, with the intention of taking part in the invasion of mainland Europe.

Graeme Warrack was promoted to Colonel in May 1944, and assumed the role of Assistant Director Medical Services (ADMS) to 1st Airborne Division and continued in this role when he took part in Operation Market Garden. The operation did not work go to plan and instead of being based in Dutch hospitals as expected the medics were located in a number of buildings mainly situated in Oosterbeek, or the 'MDS crossroads'. One of these was the Schoonoord Hotel into which Colonel Warrack moved his office on 22 September and worked with the other medics treating an increasing number of casualties in deteriorating circumstances. These medical facilities were often in the firing line and, remarkably were in certain cases in front of British positions so casualties had to be evacuated forward - surely a unique occurrence.

Due in part to the difficulties of this unprecedented situation and the high casualty numbers of the ferocious Battle (it is recorded that about 3,500 men from 1st Airborne Division were injured in some manner during the conflict) a drastic solution was required. Consequently, Col Warrack played a vital role in negotiating an agreement with German forces on 24 September to ensure the evacuation of casualties (which were heavy on both sides). More details of this delicate negotiations are found in the extended article below.

Despite the Medical Services' best efforts, as the end of the Battle approached until the night of the withdrawal on 25-26 September 1944, the wounded continued to move into the medical facilities. It was simply impossible to try and evacuate these across the river and so most of the medical staff stayed behind with the wounded to await the arrival of the Germans on the morning of 26th September.

The total number of casualties totally overwhelmed the German medical resources and many of the men evacuated in the truce were taken to a pre-war Dutch Army barracks at Apeldoorn, which became known as the Airborne Hospital, which was run by the airborne medical services. This was already running when Graeme Warrack arrived in the afternoon of the 26th and he assumed command. Over the next few days he had many arguments with the Germans over the treatment and evacuation of the wounded and through remarkable force of character, generally managed to get his own way(!).

However, men were escaping over the wall nearly every night and the writing was on the wall that soon everybody would be evacuated to Germany. Graeme was determined to avoid this fate and discovered a 'hidey-hole' above his office which could be reached through a panel in one of the cupboards in his office. He disappeared into this on 17th October with the intention of coming out later and reaching the Allied lines. This is what he did and after making contact with the Dutch underground took part in the abortive Pegasus 2 escape attempt. He actually reached Allied lines in February 1945. He was awarded a DSO for his service at Arnhem.

After the war, he wrote an account of his time at (and subsequent escape from) Arnhem, published as Travel by Dark (1963). The story was also turned into a film by the BBC called Arnhem: the story of an escape.

He was released from the Army in June 1946, but continued his service in the TA. He was appointed Honorary Physician to the Queen in July 1958, and finished as TA Adviser to the Director General Medical Services(DGMS), as a Brigadier. He also acted as Honorary Colonel to 144 Parachute Field Ambulance from 1969 to 1979.

Account of the 1st Airborne ceasefire negotiations to secure the evacuation of injured men from Arnhem, 24 September 1944

Colonel Graeme Warrack was promoted to Assistant Director Medical Services of 1st Airborne Division in May 1944, and held this position in September 1944 when he took part in Operation Market Garde 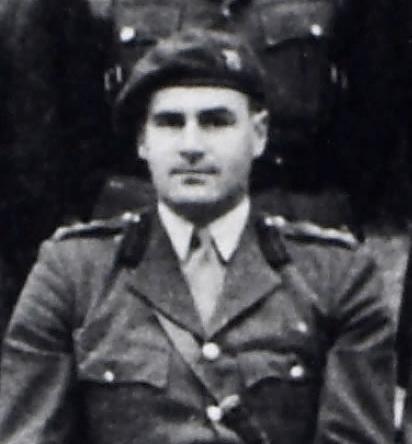