Gordon Thomas Mills was the son of Trevor and Rose Mills and the husband of Sybil Mills, of Whitchurch, Glamorgan. He was granted a commission and volunteered for airborne forces.

Capt Mills is known to have been killed on the evening of 27 September 1944, aged 27, near the north bank of the Rhine at Oosterbeek. He had been hiding there for two days, together with Lt Boyd of C Squadron, after an abortive attempt to cross the river during the evacuation. As they were making their way north, the enemy surprised them. Capt Mills was shot, dying instantly, and the Lieutenant had no option but to surrender. It is assumed that the captain’s body somehow ended up in the Rhine, because it was recovered from the river Grift at Rhenen after the liberation, and was buried in the local General Cemetery (Achterbergsestraatweg) on 6 June 1945.

London Gazette 11 April 1946, Mentioned in Despatches (MiD). This officer has taken part in three airborne operations, in Sicily, Normandy and Arnhem. On all three occasions he has landed his glider safely and got his load out and into action. In addition, during the operation at Arnhem in September 1944 Captain Mills accomplished his ground duties with exemplary coolness and efficiency and, when suffering from shell concussion and utter weariness, remained with his squadron and fought to the end. His example was an inspiration to his men.

If you are part of Capt Mills’s family and would like to complete this biography, you can apply to the Curator to do so. To do this you will need to become a member of ParaData and select the 'friend or family member' option on the registration form. 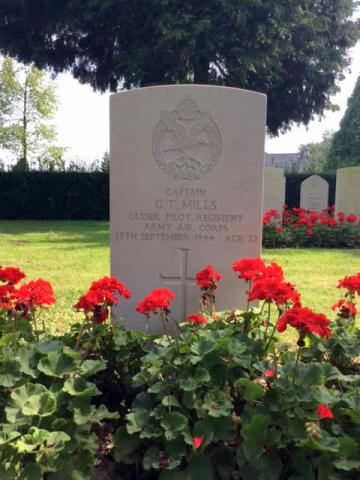