He was granted an emergency commission in the Reconnaissance Corps in April 1941 and later volunteered for service with The Parachute Regiment in 1943.

He attended RAF Ringway for parachute training in December 1943 as part of a cadre of 17 officers and 360 other ranks. Bad weather during the course prevented jumping for three consecutive days after the men had completed the required jumps from the training balloon. 10% of the course failed to qualify with 11 refusals, 11 men sick and 15 men injured during training. The course instructors' notes for Lt Hill record: 'Very good performance, confident parachutist.'

He served as the Platoon Commander of 6 Platoon, B Company, 3rd Parachute Battalion during the Battle of Arnhem, Market Garden in 1944.

Lieutenant Hill died on 18 September 1944, aged 26 years old. He is believed to have been killed  in the morning when 88mm German guns persistently shelled the battalion as it tried to advance to the road bridge in Arnhem.

Lt Hill was initially given a field burial in Moscawa General Cemetery in Arnhem and is now buried at Oosterbeek War Cemetery. 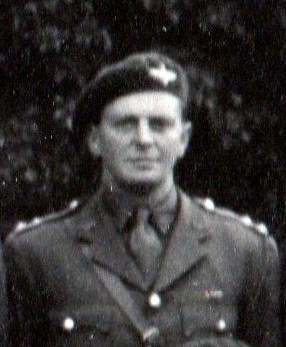