Gordon Howes enlisted into The Royal East Kent Regiment (The Buffs) in 1940 and served in 70th (Young Soldiers) Battalion.

On 25 November 1942, he transferred to The Depot and School Airborne Forces at Hardwick Hall. After qualifying as a military parachutist in March 1943 he was posted to 6th (Royal Welch) Battalion and embarked with the Battalion for North Africa in April.

He later took part in the amphibious landings into Italy in September 1943. Although the landing was unopposed the transport ship HMS Abdiel, carrying the 6th Welch Parachute Battalion including Gordon, struck a landmine in Taranto Harbour killing over 50 members of the Battalion.

His battalion remained behind in Italy as part of the 2nd Parachute Brigade in an infantry role until the end of May 1944. For the last two months they occupied defensive positions holding part of the Cassino front.

He was also deployed with the Battalion for Operation Dragoon into Southern France and Operation Manna in Greece over the Winter of 1944-45.

After a month in Palestine, Gordon returned to the UK in time for Christmas 1945 and subsequently served at No 2 (Parachute Regiment) Infantry Training Centre at Shorncliffe until his demobilisation from active service. He transferred to the Army Reserve in September 1946 and later served in a Territorial Army unit of the Royal Artillery from 1949 to 1951.

By ParaData Editor based on service records. 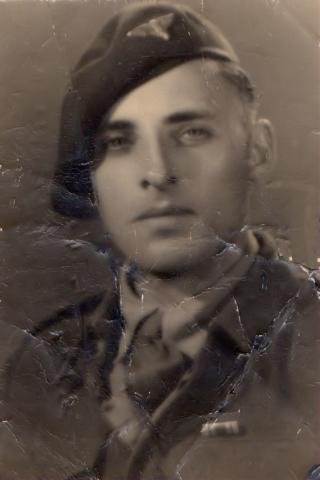