Gerald Maurice Infield is of Jewish descent from Hampstead London. He was granted an emergency commission into the King's Royal Rifle Corps in 1941 and later volunteered for airborne forces.

He was posted to the 3rd Parachute Battalion and later took part in 1st Airborne Division's assault to capture the Rhine Crossings at Arnhem, during Operation Market Garden, as the Platoon Commander for No 8 Platoon in C Company.

Having parachuted several miles west of Arnhem on Sunday 17 September 1944, C Coy 3rd Battalion made it to Arnhem Bridge to reinforce the men of the 2nd Parachute Battalion. On the instructions of Lt Boiteux-Buchanan, Lt Infield took his platoon to defend a crossroads just north west of the bridge, which they did for several days until overrun and captured.

Lt Infield was subsequently held as a Prisoner of War at Oflag 79 near Braunchweig, and later served as a Staff Captain in the War Office until demobilised in 1946.

After the war Gerald Infield worked as a solicitor. 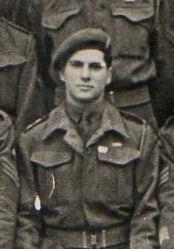