George William Culley was born in Wiltshire and granted a regular commission in the Royal Artillery in January 1938.

By January 1943 he had been promoted to Captain and was serving with 413 Battery, 147 Essex Yeomanry Field Regiment.

In 1944, he was attached as a Forward Observation Officer (FOO) to the Sherwood Rangers Yeomanry and provided critical fire support to 82nd Airborne Division during Operation Market Garden. As a result of his gallantry he was awarded the Military Cross and his citation noted:

"Capt Culley has been attached to A Sqn SRY as FOO since July 1944.
On 26 Sept 1944 A Squadron was supporting the 82 US Airborne Division in the area of Groesbeek facing the Reichwald. This section of the front had been subjected to constant enemy counter attacks against the American positions. Owing to the nature of the ground on the edge of the Reichwald it was extremely difficult to obtain any observation of enemy positions from our lines. Capt Culley however, on his own initiative, worked forward with his tank, under cover of dark, to a position affording some cover in among some trees, well in front of the rest of the tanks and within a short distance of the Reichwald, and forward enemy positions.
Inspite of constant enemy shelling and Mortar Fire, Captain Culley remained there for three successive days, during which time he continually brought down accurate and devastating fire on enemy positions.
On the first days on three separate occasions the enemy formed up in force to counterattack but Capt Culley immediately brought down such rapid and accurate fire with a result that the enemy counter attack was broken up each time. There can be no doubt that had the enemy succeeded in penetrating that sector of the line which was thinly held by the 82nd US Airborne Division, who at that time were holding the entire line around Nijmegen bridgehead, the consequences might have proved most serious. Such an occurrence was largely prevented on this sector by the efforts on the part of Capt Culley who remained solidly in his position of observation which was made so extremely uncomfortable from constant shelling from the enemy who must have known his position.
Throughout these three difficult days, Capt Culley's coolness, courage and amazing display as an FOO working with armour was of the highest order. It was largely due to the efforts on the part of Capt Culley that the Regiment received from the 82nd US Airborne Division such a generous letter of appreciation and commendation for the support that was given to the Division during these early critical days."

He was promoted to Major in 1945 and appointed as the Commander of 210 Battery of the 53rd (Worcester Yeomanry) Airlanding Light Regiment RA. 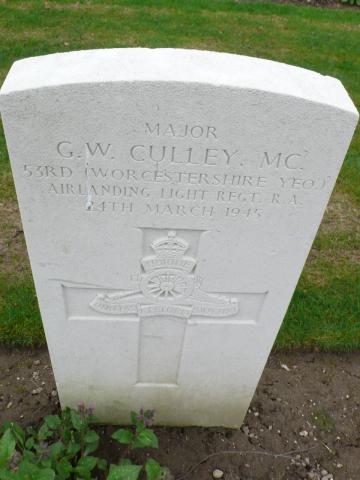