George Sandford was born in Edinburgh in October 1928 and worked for Lorimer Brewery before he joined the army. He enlisted in November 1946 into The General Service Corps and then transferred to The Royal Artillery (RA).

Fusilier Sandford was posted to the RA Depot in December 1946 and after Basic Training he was posted to 55th (Suffolk Yeomanry) Ant-Tank Regiment, RA (55th A/TK RA) embarking for Germany as part of British Army on the Rhine (BAOR) in January 1947.

In May 1947 he served with 33rd Airborne Light Regiment RA, returning to the UK in February 1948.

After returning from leave in March 1948 he was posted to an admin appointment until his demob in September 1948.

George Sandford enlisted into the Territorial Army in January 1950, joining 15th (Scottish) Parachute Battalion (TA) and qualified as a military parachutist in November 1951.

Private Sandford transferred to 16th (Welsh) Parachute Battalion (TA) and served with them until the unit disbanded in October 1956. He then served with 6th Battalion The Welch Regiment TA until 1959.

Lance Corporal Sandford re-enlisted into 6th Battalion The Welch Regiment TA in May 1962 for two years.

George and his wife Iris (who he married in 1948) had six children. 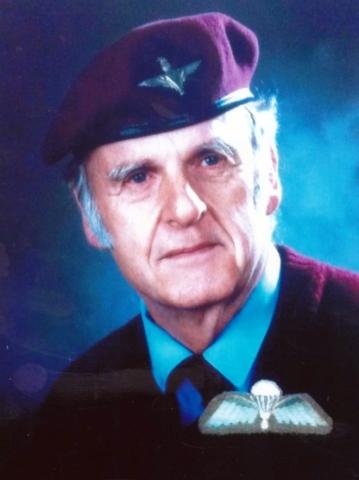