George Smith enlisted into the General Service Corps on the 17 September 1942 and was sent to No. 51 Infantry Training Centre.

On the 28 October 1942 he transferred to the Royal Army Service Corps and was posted to the 7th Training Battalion, where he was trained as a General Duties Driver.

On the 11 February 1943 he was posted to the 250th (Airborne) Light Composite Company, RASC, which was part of the 1st Airborne Division.

After completion of the build-up and formation of this unit it was deployed for overseas service in North Africa. George was in North Africa from the 16 May 1943, where he helped with the transport of the 1st Airborne Division from Algeria to Tunisia and the mounting airfields for the invasion of Sicily in July 1943.

It is likely that George did his parachute course in Tunisia in August 1943. A small parachute school was set up by the 4th Parachute Brigade to run courses for personnel it was felt needed to be parachute trained, but had not had the chance in England.

On the 22 December 1943 George was re-embarked on a troop-ship bound for the UK.

Upon return to the UK. the 250th Company was billeted at the Moorlands Hotel, Neward Road, Lincoln.

By September 1944 George was serving in 3 Platoon under the command of Captain WVA ‘Bill’ Gell and on Sunday, 17 September 1944 he took off from an RAF airfield in a Horsa glider with a jeep and trailer for LZ ‘Z’ near Wolfheze and Heelsum in Holland as part of ‘Operation Market-Garden’.

His platoon swapped places with 1 Platoon, so they ended up supporting the 2nd Parachute Battalion in the battle around Arnhem Bridge.

He was wounded and taken prisoner on Thursday, 21 September 1944, along with ‘Jock’ Ferguson, ‘Charlie’ Payne and ‘Teddy’ Chapman, who were all in the same platoon as him and good mates. He remained a prisoner until liberated by Allied Forces on the 19 April 1945 and was then flown home the next day.

After leave he was posted to the 4th Division Troop Unit, 28 July 1945, and then he was discharged from Regular Army Service on the 24 October 1945, as he had ceased to fulfil Army Medical requirements. Upon discharged his Military Conduct was noted as: Very Good.

A few memories from his eldest daughter, Johanna Legg;

“My dad often referred to little things that happened to him during his time in the army but always in a jokey way. Having three girls was probably not conducive to battle chat but he didn't ever seem to want to talk about the 'hard' times preferring to remind us of silly things like; - green water (leftover water from cooking cabbage) was very good for us because that was all he got while prisoner of war! Don't know if this was true..! -he lost his helmet jumping out of the glider; -had the heel of his boot shot off;-how he pinched a picture of Hitler from a building and hid it under his jacket then when he was captured and searched thought that was the end of him, but, the German who pulled it out just laughed along with his comrades! Once we married, his son-in-laws were much better for battle chat but even then they all said he never really spoke about the horrible things he must have seen or had to do”.

After the War he led a single life until marrying Jean Duthie in February 1960. First daughter (Johanna) came along the same year. Then came Kathy and Nancy in 1962 and 1965. He always lived in East London, Canning Town and then Stratford until his death and always stayed very close to his brothers and sisters, who lived local too. All his brothers served in the Second World War too.

He returned to dock work until 1976 when he took his severance and went to work for British Gas, as a driver, and then, until his death, at a police station doing early morning cleaning.

George Sidney Smith died on the 3rd November 1998 at Newham General Hospital with all his family around him. 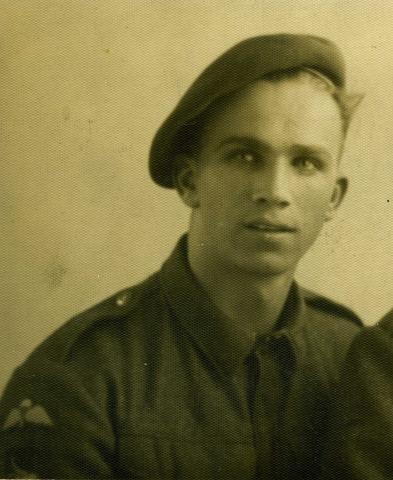