George Oliver Sanford was the son of George and Esther Ellen Sanford, of Abingdon, Berkshire.

He served in The Berkshire Regiment prior to volunteering for airborne forces in 1944.

Sgt George Sanford qualified as a military parachutist on course 115, which ran at RAF Ringway in May 1944, and joined the 9th Parachute Battalion as a reinforcement.

After serving in Normandy his battalion was deployed, along with the rest of 6th Airborne Division, during Christmas 1944 to repulse a major German offensive in the Ardennes. He was killed a few days into the campaign.

Sgt George Sanford died on 5 January 1945, and is now buried in the On Communal Cemetery, Marche-en-Famenne, Belgium. 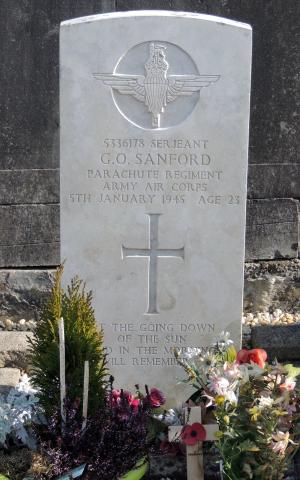