Before The Second World War, George Miller lived in Battersea, working with his father at Battersea Power Station.

He enlisted as a boy soldier into the Queens Own Royal West Kent Regiment. He later transferred to the Royal Engineers and volunteered for airborne forces, joining, 3 Platton, 9 (Airborne) Field Company RE.

Sapper Miller went to Arnhem by glider on Operation Market Garden. He helped lay the tapes that guided troops to the shore for the evacuation back across the Rhine, he successfully crossed the river and returned to Britain.

In Palestine, Cpl Miller was amongst those who dealt with Jewish immigration ships and with the clearance of the King David Hotel after it was bombed by terrorists.  He was later wounded and returned to Britain and demobbed.

Cpl Miller was Recalled to Colours for Operation Musketeer, during the Suez Crisis in 1956.

‘George made his home in Hastings which he loved and became a great part of it. As time went on he owned a number of businesses on the sea front and was generous to fault with his friends, and to Parachute Regimental Associations in Hastings and Eastbourne along with 9 Squadron Royal Engineers.

George passed away on Sunday 9 November 2014 whilst returning home from paying his respects at a Service of Remembrance .

His wit and good humour always made these events very memorable and his passing has left a large hole that will never be filled.’ 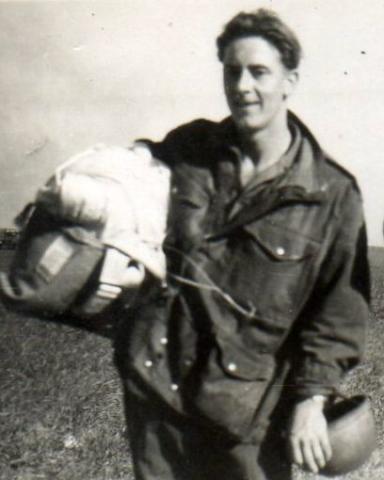