He was granted an emergency commission with The King's Regiment (Liverpool) in January 1940, after completing training at 165 Officer Cadet Training Unit.

Blundell volunteered for airborne forces while serving overseas, transferring to the Army Air Corps in November 1942, and qualified as a military parachutist in the Middle East at Kabrit.

By 1944, Blundell was serving as the Intelligence Officer in 4th Parachute Brigade Headquarters. He deployed for the airborne assault by the British 1st Airborne Division to capture the Rhine crossings at Arnhem, during Operation Market Garden.

The brigade made an opposed jump under enemy fire on Monday 18 September onto Ginkle Heath (Ginkelse Heide). Blundell was killed a couple of days later when the 4th Parachute Brigade Headquarters was attacked by German forces.

Captain Blundell died on 20 September 1944, aged 27 years old, and was initially given a field burial in a mass grave near Van Tienhovenlaan, Oosterbeek. He is now buried at the Arnhem Oosterbeek War Cemetery, in the Netherlands. 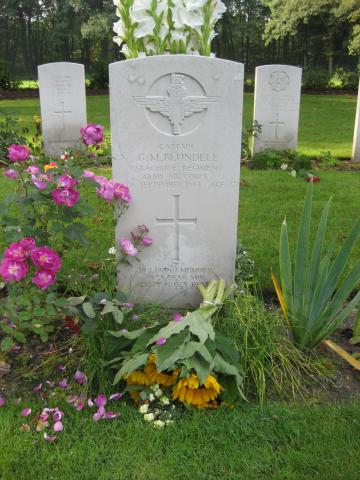