George was born on the 1st June 1911 at 102 Sheriff Street, West Hartlepool, County Durham in the Parish of St Pauls, West Hartlepool. His parents were John Thomas Fox and Amy Fox (nee Picken), formerly of Haverton Hill in County Durham. He had an older brother, William.

George enlisted in The Green Howards at Middlesbrough in the County of Yorkshire on the 18th November 1929, then aged 18 years and 5 months. He signed up for 7 years' service as a Regular soldier with the Colours and 5 years' service with the Reserves. His civilian occupation on enlistment is described as Labourer. At this time his brother was serving with The Duke of Wellington’s Regiment.

His army career began when he was posted to the 1st Battalion The Green Howards, which was on a home posting based in the South of England. During his service they took part in the guarding of Buckingham Palace, 8 August – 1 September 1930, being based at Wellington Barracks during this time. His Regiment regularly took part in the Alma Day parades (commemorating the Battle of the Alma, 20 September 1854), 1931, 1932, 1933 and 1934 at Aldershot.

In December 1931 he attended the 37th Preliminary Course of Physical Training of Aldershot Command. At this time he was based at Maida Barracks in Aldershot. It is possible that he also boxed for the Battalion as he had some trophies for this activity.

On the 29th July 1931 he married his childhood sweetheart, Edith Harrison at the All Saint’s Church, Preston-On-Tees, Eaglescliffe, Stock.

At the time of his discharge from his Regular Army Service, 23rd April 1936, at Portland he held the rank of Lance Sergeant. His testimonial recorded his military conduct as “Exemplary” and that he was (in the words of his C.O: Lt-Col.H.S.Kreyer), “A very good type of man. Cheerful, very smart and energetic. He is thoroughly reliable and has a good manner. I can recommend him for any position of trust”.

After less than 3 years with an Engineering firm and serving in the Reserves George was recalled to the Colours on the 15th August 1939, less than 3 weeks before war was declared. George was obviously happy to be back in uniform as he disliked ‘civvy’ street.

In June 1943 the Battalion was selected to become the 12th (Yorkshire) Battalion The Parachute Regiment and he was promoted to be the Regimental Quarter Master Sergeant. As part of the Quartermasters Stores he did not need to be a qualified parachutist as he would land with the Battalion follow-up force bringing in extra ammunition, stores, etc, but after the main part of the battalion had completed a parachute course he applied and was accepted to attend parachute course number 84 on the 20th September 1943. Unfortunately, during the ground training phase it was found that George was suffering from sciatica and was returned to his unit.

He landed in Normandy on the 6th June 1944, with the Seaborne Echelon, and stayed with the Battalion until the end of that campaign in early September 1944. He then deployed at short notice (24th December 1944), along with the whole of the 6th Airborne Division to the Ardennes in response to the surprise German counter attack. After taking part in the 5thBelgium the Battalion was used to hold the line to the north of Venlo, returning to U.K. 22nd February 1945.

Parachute Brigade’s actions around the area of Bures in Belgium the Battalion was used to hold the line to the north of Venlo, returning to the U.K. on 22nd February 1945.

For his actions in the Normandy campaign he was awarded the M.B.E. announced in the London Gazette 1st February 1945:

Fox has exceptional organising ability and throughout the operations has been one of the main stays of the Battalion. His thoroughness and devotion to duty have been remarkable. He has taken endless pains to see that the administration of the Battalion has been of the highest order. Nothing has been too much trouble to provide for the troops in the front line, with the result that the task of re-organising the Battalion has been facilitated. His cheerfulness, thoroughness and devotion to duty have at all times been exceptional.

He has been consistently brave under fire.

For the final large airborne assault of the North West European war, ‘Operation Varsity’, the 5th Parachute Brigade was allocated 8 Horsa gliders (chalk numbers: 424-435) and was flown from R.A.F. Shepherds Grove by D-Squadron, The Glider Pilot Regiment and towed by Stirling aircraft of No 38 Group. R.Q.M.S. Fox was killed on the landing at D.Z. ‘B’ in his Horsa glider just outside the town of Hamminkeln on the 24th March 1945. He is buried in the Reichswald Forest War Cemetery, 42. A. 7.

As well as the M.B.E. he was awarded an M.I.D. His wife and daughter, Edith and Edith Patricia, were invited to Buckingham Palace for presentation of the M.B.E. on Tuesday 29th October 1946, “in order that you, as next of kin, may receive from the King the Insignia of a Member of the Most Excellent Order of the British Empire awarded to your Husband, the late Regimental Quarter-Master Sergeant George Alfred Fox, M.B.E., Army Air Corps”. Two third class train tickets were forwarded for his wife and daughter to travel to the capital.

George was still a young man, just 2 months away from his 34th birthday, only 6 weeks away from the end of the Second World War. He loved being a soldier, the Army was his career and he was at the peak of that career. A tragic loss, only one among thousands, but sadly missed nonetheless. His medals, a couple of boxing prizes, and a small number of photographs which Patricia now proudly own, are all that is left of this once mighty soldier. May he forever rest in peace on the foreign soil in which he is buried.

Compiled for ParaData by Bob Hilton from information supplied by the Fox family. 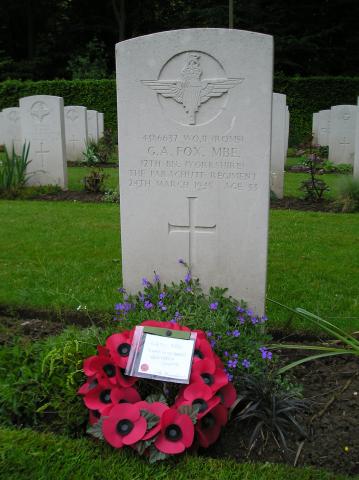