George Edwards was born on 23 January 1926 in Birkenhead.

He was given his medical at St George’s Hall in Liverpool in August or September 1943, whilst still seventeen years of age.

He was called up in March 1944 and did his initial military training and service with the King’s Liverpool Regiment, even though he had asked if he could go straight into the Parachute Regiment!

Eventually he was allowed to volunteer for Airborne Forces and was sent on parachute course 132, August-September 1944, at RAF Ringway and was then posted to the 13th (Lancashire) Parachute Battalion.

He saw service in the Ardennes, December 1944 – January 1945 and in the Battle of Bure.  George recalls:

The night before we stayed in a town miles from Bure, each man in a private house [by Platoons]. I stayed with a couple who had two little girls, one nine and the other six, and the mother got up as I was leaving next morning, at about 6 o’clock. She gave me a photo (I still have today) and said, ‘fight for my little girls’, of course I said I would.

In the Battle for Bure we were positioned in an open and exposed position on a path next to a house. So, we decided to take cover in the house where we could still keep an eye up the road and cover the Vickers machine-gun position that had been set up near us.

A little while later an officer appeared at the house and asked why we had left our position and left the gun unattended, there was no one with it. Even though I was a ‘new boy’ I pointed out where the enemy fire was literally zipping past our position down the street with bullets and tracer rounds striking the walls and ricocheting in every direction. The officer ordered me to recover the gun. So I crawled down the steps of the house and staying on my belly made my way across the road to the gun and dismounted it from the tripod and carried it, still on my belly, into the house. I repeated this four more times for the tripod, ammo and water cooling can.”

After this he helped the man of the line along the River Maas in Holland, January – February 1945. He also took part in ‘Operation Varsity’, the jump across the Rhine on 24 March 1945 and the pursuit of the German Forces across Northern Germany to the Baltic at Wismar.

In July 1946 he was posted to another unit of the 6th Airborne Division, possibly the 17th (Durham) Parachute Battalion in Palestine. 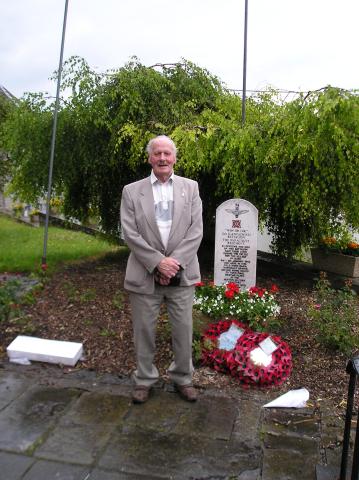 Jean Lester said:
george was my uncle and I am so proud of all he did as such young man, they were all so brave
Add your comment