George Edwin York was born 24 September 1910 in Battersea and joined the Army on 17 October 1940, serving with the Royal Armoured Corps and Royal Artillery, before volunteering for firstly the newly formed Royal Electrical and Mechanical Engineers and then the 1st Air Landing Reconnaissance Squadron in 1943.

He served in North Africa and later Italy in 1943 where he distinguished himself through his excellent driving and mechanical skills, as well as his courageous actions.

During the attack by the 4th Parachute Brigade on Mottola in Southern Italy, 11 September 1943, ammunition began to run low. Major ‘Freddie’ Gough later described the event in which York was centrally involved: 'At a critical moment the 156 Battalion’s 3-inch mortar were almost out of ammunition, but we ourselves had a reserve which was in a requisitioned Italian civilian lorry, just round a bend in the road, and refusing all efforts to start it. York went back, got it going and brought it up at speed, in full range of a German 88 mm gun, about 400 yards away. Nothing daunted, with shattered windscreen and bullet-holed canvas, he then helped to get it unloaded in record time. Miraculously, he survived without a scratch.'

Both Brigadier Hackett and Lieutenant-Colonel Sir Richard de B. des Voeux, commanding officer of the 156 Parachute Battalion, were witness, together with Major Gough, to this very courageous act, and York was, there and then, immediately recommended for the award of the Military Medal. Characteristically, he later maintained that he had won it under false pretences, humorously adding that he had, all the time, been under the impression that the truck really contained blankets!

The 1st Airborne Division returned to the United Kingdom in November and December 1943, with most units docking at Liverpool between Christmas and New Year.

In March 1944 Craftsman York attended a parachute course at RAF Ringway near Manchester and on the 15 March was granted his parachute pay. On the 29 April he re-mustered in the Squadron as their Vehicle Mechanic.

On Sunday 17 September 1944 Craftsman York landed in a Horsa glider in Oosterbeek on LZ  ‘Z’ along with others from the Motor Transport and Stores Section and after unloading they would have moved up to the Wolfheze railway crossing site. Craftsman York, along with Troopers Chadwick and White, also from the Reconnaissance Squadron were directed to take wounded men by jeep from the area of Oosterbeek cross roads down to the dressing station by the church. The Reconnaissance jeep went down Hoofdlaan and, on nearing its objective, had to run a gauntlet of German machine-gun fire from the houses opposite the church. Once arrived, they took the wounded into Mevrouw Kate A Ter Horst’s house, which was being used as a dressing station and throughout which wounded British soldiers lay in every room, corridor and landing.

Having delivered their wounded safely into the hands of the medics, the three Squadron men were then absorbed into Lonsdale’s Force. It was a type of decision that was being increasingly made, as units were more and more fragmented and local commanders had to do their best to organize what forces were available to them. At that point, Lonsdale was down to only 80 men and, as he was anticipating a major German attack in order to try and cut the British off from the river, he needed all the help he could get. At 18.40 hours, the expected attack came in. It was heavy, but it was held by Lonsdale’s men and the British then counter-attacked.

During this action, Craftsman York was wounded in the leg. He was recorded as being admitted to the 133 Dressing Station in Oosterbeek and being given a dose of sulphamide at 11.00 hours on the 25 September 1944. He was taken prisoner at the end of the battle and was sent to Stalag XIB at Fallingbostel. He was put to work in the fields, and manage to escape three times, being recaptured and returned to Stalag XIB each time. Conditions were appalling, and he was reduced to eating grass soup.

After release from the POW camp by liberating Allied Forces he was discharged from Regular Army Service 11 December 1945.

On the 26 November 1945, as he was awaiting his discharge, Major ‘Freddie’ Gough wrote him the following testimonial:

To whom it may concern: Mr.G.E.York of 1 Greengate, Putney, served under my command in the 1st Airborne Reconnaissance Squadron, 1st Airborne Division from April 1943 until he was taken prisoner in the Battle of Arnhem in September 1944. Throughout this time he was employed as a Unit Fitter and also as a driving instructor. I cannot speak too highly of his work or of his tremendous spirit and cheerfulness. Whilst the Unit was on active service in Italy, Tpr. York was awarded the Military Medal for an act of very considerable coolness and gallantry which I personally witnessed. He is entirely trustworthy, very hard working and it gives me great pleasure to recommend him for any responsible employment, particularly where his knowledge of driving and mechanics play a part. 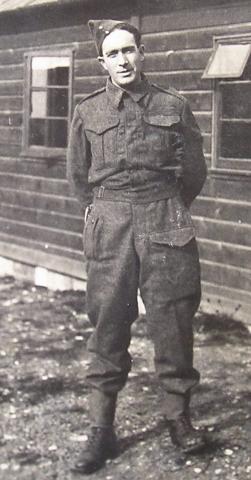