George Ellis Holderness was the son of Charles Ernest and Rose Holderness and the husband of Marie Holderness, of Thornton Heath, Surrey.

George was a pre-war regular and serving with the 2nd Battalion, The Ox and Bucks Light Infantry in India, in 1939, when war was declared. The unit returned to the UK in mid 1904, and were formed into an Independent Brigade Group, (which eventually became the 1st Air Landing Brigade).

During this reorganisation, George volunteered for the Anti-Tank Company, which was then transformed into the Reconnaissance Company. When this became the 1st Air Landing Company, Reconnaissance Corps George was assigned to ‘C’ Troop and had had gained the rank of Corporal.

On 9 September 1943, the Squadron landed at Taranto harbour in Southern Italy and immediately started probing patrols to the North-West, North and North-East of the town. ‘C’ Troop had the job of reserve Troop on the centre line. George was awarded a Mention In Despatches for his actions during this part of the campaign. After completion of offensive operations at the end of September, the Squadron was based at Foggia airfield and then moved to Bari. In November they re-embarked at Taranto for Philipville in North Africa, before finally setting sail for England in December 1943.

The Squadron arrived home in time for Christmas leave and then moved into its new billets in Ruskington, Lincolnshire in January 1944. On 4 May 1944, George was promoted to Staff Sergeant and took over as the Squadron Quarter Master Sergeant, posted to Headquarters Troop.

On 17 September 1944, he flew to Holland as part of Op Market-Garden. During the ensuing Battle of Arnhem, he fought in the perimeter positions just to the North-West of the Hartenstein Hotel, HQ 1st Airborne Division, and then helped to organise his small group for the withdrawal:

'The stealthy progression of the small groups down to the river had about it an unreal quality. [Lance Sergeant] David Christie, who was with a party of eight, remembers his own experiences on the journey: “Our route took us through close, wooded country in which, aided by darkness, it was impossible to see anything more than three yards ahead. We gripped the tail of the man’s smock in front in order to keep together. This incident reminded me of Christmas parties, but this was a rather different type of party”.

This, as it happened, was all too tragically brought home to another of the Squadron HQ groups, which was under the leadership of [Captain] Geoffrey Costeloe. They were about fifteen in number and had made good progress when, not far south of the Hartenstein, they came under German machine-gun fire from somewhere in the direction of Hotel Tafelberg.

In the ensuing confusion, the party was slightly dispersed, and the rear man, S.Q.M.S. George Holderness, had the job of getting them all back into line. It was whilst doing this that, in the darkness, he approached a standing figure whom he assumed was a member of the group. Unfortunately, it was a German, who shot him dead.'1

SQMS Holderness is officially listed as Killed In Action on 25 September 1944, aged 30 years old. After the battle, the body of George Holderness’s body could not be found and he is now commemorated on the Memorial at Groesbeek Canadian War Cemetery, near Nijmegen. 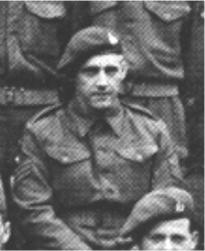