George David Wake enlisted for National Service into the Parachute Regiment in July 1950.

He was posted to 11 Platoon, D Company, the 1st Battalion, The Parachute Regiment at Albuhera Barracks Aldershot.

Private Wake owned a horse called Belle which he was allowed to keep in Aldershot with him.

He later serviced in Cyprus, and the Canal Zone in Egypt before demob in April 1952. 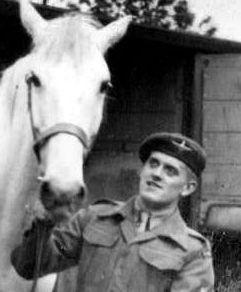