I was born in Edinburgh and brought up in Fife from the age of three. Left school aged 15 on a Friday and started work in the coal mines on the Monday - culture shock or what!

I came from a long generation of soldiers. On 13 June 1958 I signed on for the RAC Junior Leaders Regiment where I spent two fantastic years down in Dorset.

On 3 May 1960, I embarked on the TS Vienna in Harwich to join my Regiment, The Royal Scots Greys in Munster West Germany and served in Recce troop. Shortly afterwards the Regiment moved to Detmold where I still served in Recce. We then returned to Edinburgh in preparation for sailing on the Troop ship Nevassa out of Southampton for Aden, still with my beloved Recce troop.

I was probably one of only a few people who loved the desert and the thrill of racing across the desert on my Ferret armoured car. We spent a lot of our time in the West Hadramat helping a Topographic Unit of the Royal Engineers with mapping that area and escorting the Supply convoys up through Radfan to Dalah to replenish 45 Commando up on the Yemen border. I was then transferred to RHQ Tanks as my career moved on. Along with a troop of tanks from B Squadron, we were the first ever to take get tanks up onto the Yemen border north of Beihan.

During my time in RHQ tanks I started training for 'Selection' when my CO told me he wanted me to go for selection for the RAC Para Squadron instead, which was to be formed in Tidworth from elements of the Special Recce Squadron, recently disbanded and Cyclops, who were trialling the Malkara GW air portable system. It was there that I probably spent the best years of my career.

During my time there as part of the Recce Troop once more, I went with a troop of Hornets to Bahrain with 1 Para Battalion Group. When we got to Hamala Camp we were told that our Ferrets would not be arriving and were issued with two Bedford RLs instead. By the end of the we could make them go over terrain that a ferret wouldn't handle-they were brilliant. During that eleven month tour we went down with a company to Aden (my old stomping ground) as the 'mud' down there was hitting the proverbial fan, and spent most of the time in 'Crater.'

After returning to the UK I reluctantly applied for transfer to the reserve for domestic reasons and for the next 5 years and 192 days (but who's counting) I drifted from job to job, mainly in the Slough area-all the time constantly missing the military. Northern Ireland was starting to rear its ugly head so I decided to re-enlist before it was all over as I wanted a piece of the action. I got that one wrong, eventually doing 4 tours of the province. I had re-enlisted into the Royal Scots Dragoon Guards which was an amalgamation of the 3rd Carabiniers(Welsh mob) and The Royal Scots Greys. We were nicknamed the Tartan Taffs initially.

During my time with the regiment I also did a six month tour in Belize but unlike most of the guys I also loved the jungle almost as much as the desert. I was eventually demobbed at the end of my service as a SSgt in Tidworth on the 1st December 1987 and joined 'Maggie's Millions.'- not a lot of vacancies for Tank Commanders in civvie street. After a year I secured a job as a Road Safety Officer with Lothian and Border Police. Kind of strange, going from the killing to the saving, although my experiences in the Army were of great use to me in that respect.

I retired on ill health grounds in 1993. 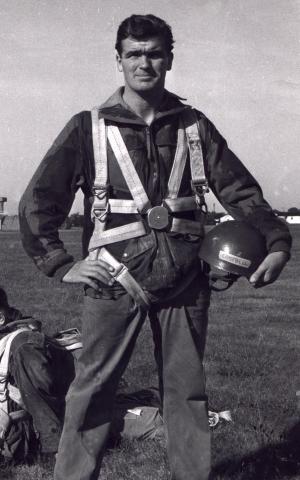