George Brownlee was a pre-war Regular Soldier serving with the Royal Artillery when war was declared.

By 1944 he was a Bombardier serving in the 4th Airlanding Anti-Tank Battery, RA and had volunteered to become a trained parachutist. He did parachute course 105 at RAF Ringway, which ran from 1-14 March 1944. His instructors comments: “Inclined to be nervous on jumping, improved on each descent.” He completed the eight qualifying jumps along with Lieut. R Trease, Sgt Fielding and Bdr Bigley, and together they would form the Parachute Advance Party for the Battery in any future operation.

“The Commander of the Artillery in the Division, Lieutenant Colonel, jack Norris, was told that twenty guns were to take off for Normandy but two 6-pounders would be on the Merville operation and would he therefore select eighteen positions east of the Orne River. . . which must defend the two bridges over the Orne River and Orne Canal and the area between ‘to the very muzzle.’

After choosing these positions he worried about the considerable number of trees and the extensive areas of water. At first he assumed he would arrive at 0300 hours on DZ/LZ ‘N’ and that he could go to 5 Para Brigade HQ and check that the Paras were in their planned positions, but then he realized that General Gale was also arriving with Div staff at the same time and place and would be with the Brigadier very quickly.”

Colonel Norris appreciated that this would seriously restrict his access to the Brigadier. He was also very worried about the possibility of his men arriving at the prearranged positions and finding no Paras there. Sgt George Brownlee:

“He thought about it and then remembered that in the 3rd and 4th Anti-Tank Batteries about twenty-four officers and NCOs were Para qualified. He therefore spoke to the Brigadier and asked if any places were available for a few of his men to go so that they could verify routes from their RV to the chosen gun positions. Brigadier Poett said he would check and very soon told the CRA that eight places were available. [He] chose a Captain and three NCOs from the 3rd Battery and two Lieutenants and two NCOs (of whom I was one) from the 4th Battery.”

These parachute-qualified artillerymen would check the gun positions and adjust them in accordance with the areas occupied by the 12th and 13th Battalions. As antitank artillerymen were trained to do each others jobs, be it gun member, NCO or officer, everybody was capable of making these decisions. The guns had to be in position by dawn.

Jumping with the 12th Battalion was the eight-man Recce Party of the 4th Airlanding Anti-Tank Battery. Sergeant George Brownlee:

“Suddenly you’re stepping on nothing, you’re out, and you’re doing about 130 miles an hour and of course for a split, split second, you’re sitting on the slipstream and it hits you. And then crack, you see your parachute open in front of you and you swing down under it. And find first thing, your hands go up check rigging lines. No, you’re not twisted or anything like that because sometimes if you went out awkwardly the wind caught you and you might get twisted which would make it awkward landing.

I was looking down, there was a bit of shrapnel flying around, but nothing very serious, nothing very near us because they were still following the aircraft. I'm looking down, I thought ‘That’s a track’ and then as I got down I thought ‘Oh, there are trees immediately there, and as I got lower ‘That is not a track, that is a stone wall and I'm going straight for it, and if I don’t land this side of it, I've got to land in the trees.’ Kitbag hits the deck, get my feet up and I’m over this wall and down. Good old solid earth.”

Sgt George Brownlee of the 4th Airlanding Anti-Tank Battery had met up with his officer, Lieutenant Trease and they headed for their RV near the Ranville crossroads:

“We got to the Rendezvous point. There was only the second-in-command there [Captain A.J. Bain]. He said, ‘Where are all the others?” I said, ‘Well I don’t know.’ It was chaotic. Odd men kept turning up, various guns turned up.

I went with Lieutenant Trease, who almost immediately was told he was a Captain, he and l had to recce a certain part of Le Bas de Ranville ... We knew somebody else was supposed to go up the hill by the farm and be able to look down at Herouvillette. Another couple did that.”

They then returned to the crossroads:

“We were just across the road in this corner of a field. That was our little Headquarters for all the guns as they started arriving. And it was then the CRA arrived and said, ‘Thank goodness you people had got in early, because you’ve already given me a lot of information. Now you can do even more by leading guns into positions which I will give you on the basis of the information you’ve given me as to where the Paras are. Some of them are not where I hoped them to be, so you will have to find other positions.’ This all took time.”

Sgt George Brownlee of the 4th Airlanding Anti-Tank Battery had been collecting ammunition and stores from the gliders on the Landing Zone (LZ), before returning to Ranville:

“I was going up this wall and I knew there was a gun just over the wall, but I was wondering ‘Where is it?’ A man appeared, it was in fact a glider pilot, sneaked through by the farm [on the forward edge of the Airborne perimeter], they’d made a hole in the wall, and he came through it. ‘Down, down, down’ he said. ‘Don’t utter a bloody sound or attempt to look over the wall. There are four tanks approaching and German infantry. If you can, you can find a hole, a chink in this stone wall and perhaps be able to look through and see,’ which is what I did.

This Para officer, he was in charge, he had men up the trees, they were snipers but they were also watching, and their orders were, ‘Watch Herouvillette.’ They signalled down below and the Para officer had seen them and he came along to Sergeant Clements and said, ‘German tanks approaching.’ ‘Yes, I’ve seen them too. If they come this way, nobody moves, nobody fires. I will be the first to fire, and I will do that either when I’m spotted or that gun is very, very, very close.’ As the supporting infantry were crossing a path through the corn, the officer leading them called out and pointed left towards the ridge. The armour was now 175 yards away.”

“At the high ground point, suddenly they were opposite Sergeant Clements and he shouted, ‘Fire!’ The nearest German infantry was about a hundred yards away, the nearest German tank was about 150, 160 yards away. Absolutely broadside on, hit it straight in the middle of the tracks. Beautiful shot. Clements and Portman both fired virtually at the same time. They hit separate targets.”

“Clements, because of the smoke and the flames from those two burning tanks could not see the other two. But Portman could and the other gun there could, and those two guns fired. Unfortunately, they hit the same tank. So the third one went up. By then Bert Clements could see the final one, Portman couldn’t but that one could. Those two both fired and the fourth tank went up.” [1]

George spent many years researching what happened to the guns of his Battery, and he had this to say about the two Horsa gliders assigned to the assault on the Merville Battery:

The other glider [Chalk Number 266] landed some distance from target. Glider came to rest straddled across a quiet country lane, north-east of Bure [Varaville]. When they got out the glider pilots said, ‘We have landed you in the wrong place’, and promptly cleared off in a northerly direction, leaving the gunners to unload the gun and Jeep. This they managed to do, but after [travelling] a few miles were ambushed and had to leave the gun.

Both these gliders were scheduled to land at 00.35 hrs on Landing Zone ‘V’ at Varaville. [2]

George went on to serve in the Ardennes and on the Rhine Crossing, where his glider was shot down and he was wounded.

[1] ‘The Pegasus and Orne Bridges’. By Neil Barber. 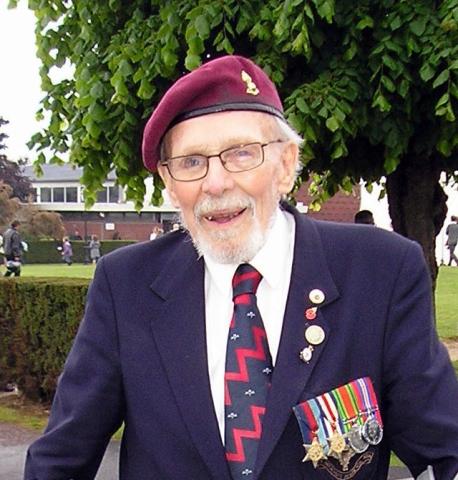