Geoffrey Alan Baker was born in Roxeth, Middlesex and was educated at Haberdashers' Aske's Boys' School. He was enlisted into The Middlesex Regiment before volunteering for airborne forces.

Private ‘Geoff’ Baker qualified as a military parachutist on course 21/22 in August 1942 and was posted to 3 Section, T Company (Coy), the 1st Battalion, The Parachute Regiment (1 Para Bn). After training he married Gladys Middleton on the 8 October 1942 at the parish Church in Longhope, Forest of Dean, before going with 1 Para Bn to North Africa.

He later wrote of his experience in North Africa:

‘While I was serving in Tunisia with the Parachute Regiment, I remember one particular incident.

The Germans were holding a hill called Djebel Mansour and our battalion was detailed to capture it.

We had the support of a contingent of the French Foreign Legion who were later wiped out as they never retire from their positions. The Grenadier Guards who were held down by the Germans and could not make their objective and a body of Tirailleurs, Moroccans, together with the khaki turbaned, long sandy colours cloaked Spahis - Tunisian soldiers.

For hours, we waited at the base of the hill to attack, the darkness lit from time to time by German flares. At four o clock in the morning, we crept forward through the undergrowth when illuminated more and more by the enemy flares. Machine guns on the slopes opened up followed by mortars, but eventually most of us reached the top, which was a narrow plateau running forwards.

We overran the German positions with fixed bayonets and yelling our war cry waho Mohammed.`

The following day we had taken the summit and we settled down in the German trenches, but the machine gunning, mortaring and shelling continued accompanied by dive bombing attacks by stukas.

During the day, I was detailed to escort prisoners and walking wounded to the base camp. I was glad to leave the chaos on the summit; I handed over my charges and again climbed the slopes.

The next day the Germans had reinforcements, which we lacked along with ammo, they threw everything at us and in the afternoon, we were ordered to withdraw to save further casualties. Still harried by the Germans we crept down through the undergrowth and down gullies and just before dusk reached the base camp to regroup.

That was when I wrote this poem’. [a copy of this poem can be viewed opposite]

[1] A letter from Geoffrey Baker

Private Baker served in Sicily and Italy before parachuting into Arnhem on Operation Market Garden as a member of 11 Platoon T Coy, 1 Para Bn. He was wounded in action on 18 September 1944 by machine gun fire from a German half-track.

‘I was a Private soldier dropped at Arnhem on the afternoon of 17th September 1944. We advanced overnight and regrouped at a road junction. Led by Lt. Jack Helingoe (Shorty) we were ordered to clear a building below the road towards the river which we did. Returning, we noticed a German half-track marked with a Red Cross between us and the river but we did not take a lot of notice. We should have done as it opened up with a machine gun and I was one of two or three wounded. I was helped into a nearby cottage with a shattered shin by Bob Hope [No.10 Platoon], while George Potter our bren gunner dealt with the half-track.

I was moved to a First Aid post and met up with Scarper Terrett [No.10 Platoon] who was wounded in the face and eventually lost an eye. We were taken by Jeep to a First Aid Post within the perimeter situated in a hotel. There we lay on stretchers on the floor packed like sardines. Around us the fighting was fierce; the plaster from the ceiling came down; a Dutch nurse was killed when shrapnel wounded her head; a German P.O.W. was disemboweled by shrapnel and I got a small piece in my heel and elbow. When the fighting was over we were moved by Jeep to Arnhem Hospital but were turned away as it was already full.

We then spent a few days in a barracks and ended up at Juliana Hospital cared for by Dutch Doctors and nurses and I remember especially the care of a Sister Buchermann and also the German orderly who when putting me on a stretcher lifted me from my bed and just let me drop. After that I was moved from P.O.W. hospital to hospital and ended up at Fallingbostel where most of the Paras were held. There I can remember Danny Morgans making me a cake to cheer me up. Also the daily hunt for fleas.

We were cared for by our own medics and eventually Doctor Huddleston stood over me and said, "I think it will have to come off." My leg was gangrenous. Just after this we were liberated by the Americans and I was flown home.’

[2] by kind permission of Mark Hickman of www.pegasusarchive.org

Once liberated form Stalag XIB in Fallingbostel and back in hospital in England, Pte Baker had his leg amputated within five days of troops liberating the PoW Camp on 16 April 1945.

In letters to his wife written while he was a Prisoner of War (available opposite) Pte Baker refers to his newborn offspring not knowing if it was called Myrna or Alan, the names they had chosen before he left on Operation Market Garden. His first child was a son (Alan) but they went on to have Myrna along with Tony, Diana and Paul.

After the war, he became a teacher and taught at Great Bircham School, Heacham School and was Headmaster at Sedgeford School in Norfolk. He retired from Newent School in the Forest of Dean.

Geoffrey and Gladys eventually settled in Hardwicke, Gloucester and he became an active member and treasurer of the Hardwicke and District Branch of The Royal British Legion for many years.

Even though Geoffrey had his leg amputated after Arnhem he stayed active until his final years when he suffered from Emphysema. He passed away at home in Hardwicke, Gloucester on 13 June 2013.

By Wendy George with kind assistance from Antony Atkin 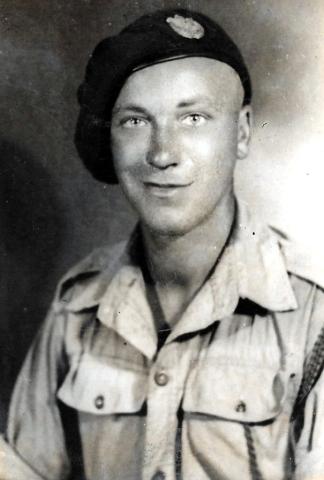